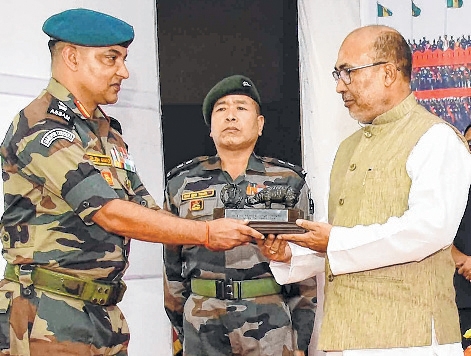 Imphal, Oct 9 (DIPR)
Chief Minister N Biren Singh has claimed that the State has witnessed considerable increase in economic/business activities and rise in number of micro and small enterprises/industries because of improvement in law and order situation in the past few years.
He was speaking as the chief guest of the 70th Territorial Army Day organised by the State Government at 1st Battalion Manipur Rifles Banquet Hall today.
N Biren said that the State has now 13,000 registered micro industries, which is the highest in the entire North East.
Stating that there has been constant rise in economic and business activities as well because of improvement in law and order situation in the past few years, the CM assured that the State Government would extend all support aid to security forces/agencies to ensure that the development momentum in the State is maintained.
N Biren Singh further said that the Territorial Army had unfailingly risen to the challenges whenever it had been called upon to serve the Nation and still continues to provide invaluable support in the developmental process through its commitment, bravery and sacrifice.
The CM continued that raising of 165th Infantry Battalion (TA) (Home and Hearth) Assam had also given employment opportunity to many youth of the State.
Since its deployment in the State in 2007, it had become an inseparable part of the security setup in the State, he said and congratulated the unit on becoming the first Territorial Army Unit to get the prestigious unit appreciation from the Eastern Army Commander.
Affiliated to the Assam Regiment, 165th Infantry Battalion (TA) (Home and Hearth) Assam is the only battalion of the Indian Army with 100 percent domicile of Manipur and hence they truly are 'The Manipur Terriers', he opined.
Deputy Chief Minister Y Joykumar Singh, who attended the function as president, mentioned the significant roles played by the Territorial Army in violent prone States like Manipur.
He said that Territorial Army help the Army and other security forces in gaining goodwill of local population. Ministers, MLAs, high ranking police, Army, paramilitary and Territorial Army officials along with their families also attended the function.