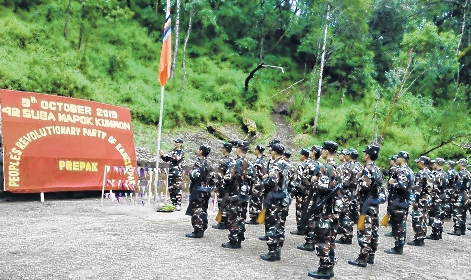 By Our Staff Reporter
IMPHAL, Oct 9 : Releasing Volume 5 of Kangla Sempung on the 42nd foundation day of PREPAK, acting chairman of the outfit has called upon all to be wary of the election sham allegedly conducted by the Government of India under the name of democracy.
Addressing party cadres at the general headquarters of the outfit today, the acting chairman who attended the foundation day function as the chief guest said that election is a beautiful concept under a democracy but the election that is foisted on the people of Kangleipak is all a sham. Elections in Kangleipak are held to befool the people that they are part of the decision making process but in reality this is a strategy to slowly erode the identity of the people.
Elections sans the rule of law and its spirit can never bring anything good for the people, said the acting chairman and added that election is just another strategy to legitimise the continued occupation of Kangleipak.
Under the sham of holding elections, the people are slowly and gradually being introduced to intoxicants, alleged the acting chairman of the outfit and added that such a policy has hit the daily wage earners the hardest, as it gives them the illusion that the everything will work out fine for the people.
The acting chairman further said that today, the land is flooded with intoxicants and corruption has got a vice like grip on society. The people are increasingly being made to come under the impression that they cannot survive without the aid of others thus letting them develop the dependency mindset.
It is to save the land and the people that the armed revolutionary movement was launched and the fight against the security personnel will continue until the lost sovereignty of the land and the people is restored, added the outfit's acting chairman.
Volume 5 of Kangla Sempung contains the address of the acting chairman of PREPAK, the English edition of the same address, the address of the chairman of MAC given on the 39th Red Army raising day, editorial, a topic on today's youth, the peace talk between the NSCN (IM) and the Government of India, etc.