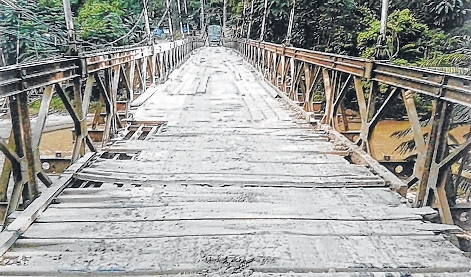 By Our Staff Reporter
IMPHAL, Oct 9: Transporters and Drivers Council (TDC) has demanded the National Highway Infrastructure and Development Corporation Ltd (NHIDCL) to properly construct the Makru and Barak bridges as well as the portion of Imphal-Jiribam road near the bridges at the earliest, challenging it to hand over the work to TDC if it (NHIDCL) cannot accomplish it.
On the other hand, it has warned of imposing a bandh or blockade along the Imphal-Jiribam road if NHIDCL fails to start repairing the bridge and the road within 10 days.
Speaking to media persons at TDC office at MG Avenue today, its president H Ranjit demanded NHIDCL to not resort to the cheap tricks used by BRO in the past to fool the people of the State.
He announced that if need be, TDC will lay rocks and pebbles for the road or repair the bridges and narrated that from 2010 till date, TDC has been doing such things to improve the road condition and it has never taken a single Rupee from anyone to cover the expenses.
Expressing disappointment at the statement reportedly made by an official source of NHIDCL about possible delay in the construction of Barak and Makru bridges, Ranjit informed that  NHIDCL had announced to complete the works by April of 2020.
He further demanded the so called official to identify himself and explained that there is no relation whatsoever between traffic frequency and the bridge construction works.
If the bridge construction work is inching at a snail's pace, how will the two bridges be completed by 2020, he asked, alleging that at any given time, not more than 5-6 workers are seen at the two sites.
Since 1971, the National Highway had been a source of income (in an unethical way) for BRO. Now NHIDCL has taken this mantle. NHIDCL outsourced the works to subcontractors and now it cannot control these subcontractors, he alleged, demanding NHIDCL to deal with the deteriorating conditions of other bridges while Barak and Makru bridges are being constructed.
Questioning where else in the country, are such road and bridge conditions found except Manipur, Ranjit  demanded the General Manager or the Deputy General Manager of the firm to clarify all the questions at the earliest, instead of some unreliable statements made by a so called source or official of the firm.
He then demanded NHIDCL to start work on the bridges and the road within 10 days to ensure that no trucks or vehicles are left stranded in light of the coming Ningol Chakkouba festival, and warned that if the firm fails to do so, TDC will be forced to impose a blockade along the route.
Mocking NHIDCL's claims to convert the highway to a four lane highway, Ranjit demanded it to work on the single lane highway first.
He also appealed to all other CSOs concerned and the people to monitor the work carried out by NHIDCL.
If the firm wants to give up, then do so. TDC will take over the charge of repairing the road. TDC will also repair the wooden structures on the bridges. Any attempts to fool or dupe the people will not be taken lightly, he warned.