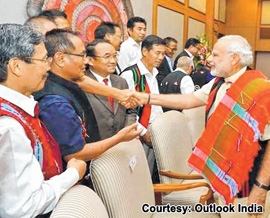 Newmai News Network
DIMAPUR, Oct 11: One day after the latest round of peace talks, which was held in New Delhi, the NSCN-IM made an official statement, saying that it is “deeply committed to the Framework Agreement, and that it will stand by it at all costs in all events”.   The NSCN-IM also said, "It is strongly opposed to imposition of one’s will on the other".  However, the NSCN-IM statement did not elaborate the latter line.
On October 10, the NSCN-IM team headed by its general secretary, Th Muivah and the Government of India's Interlocutor, RN Ravi had held talks. Sources said that both the parties dwelt on the issues of ‘flag’ and ‘constitution’ during the nearly a day-long discussion. Since the October 10 talk was inconclusive, both the NSCN-IM team and the Government of India’s Interlocutor agreed to meet again soon. One well placed source informed Newmai News Network tonight that both the parties will hold the next round of talks “as soon as possible”.
Meanwhile, a report in Nagaland Today daily said that RN Ravi and Prime Minister, Narendra Modi had a “closed-door” discussion on October 10. It was not clear whether they held the discussion after the latest round of Indo-Naga peace talks or in the morning.
On the other hand, in its official statement issued this evening, the NSCN-IM alleged that, after 22 years long "intensive" negotiations, the Government of India “has now started trying to twist and backtrack on their commitments and words so that the hard-earned Framework Agreement is nullified on any pretext”. The NSCN-IM statement further said, "It is surprising to see that the Government of India is trying to hijack the outcome of the talks by using a section of people who are not mandated and do not represent the Naga people and the Naga National issue".
The NSCN-IM then said, "It should be understood that any proposed solution that betrays the Naga National issue will be but repetition of the past mistakes". The statement added, "We are sure it will be a great loss for both the two peoples if we miss this finest opportunity. After all, the truth never dies. No power in history has ever destroyed it".
According to the NSCN-IM, recognizing the reality that the case of the Nagas is political, and not a law and order problem of India, talks between the Government of India and NSCN resulted in the signing of the cease-fire agreement on August 1, 1997.
“In the subsequent talks, the Government of India recognized the unique history and situation of the Nagas on July 11, 2002, which means that the Nagas have never been a part of Union of India nor that of Burma either by conquest of the two powers or by consent of the Nagas,” the NSCN-IM statement said.
Based on the "recognized unique history and situation of the Nagas", the Government of India and NSCN-IM signed the “historic” Framework Agreement on August 3, 2015, the NSCN-IM stated, while adding that “the BJP Government under the leadership of the Prime Minister of India, Narendra Modi took bold and positive step where it recognized the sovereignty of the Nagas stating, in keeping with the universal principle of democracy, 'sovereignty of the Nagas lies with the Naga people'”.  According to the NSCN-IM, it also "states inclusive" durable peaceful ‘co-existence of the two entities’ based on the principle of shared-sovereignty. The NSCN-IM statement then said that, by inclusiveness, NSCN-IM "emphasizes"  inclusive of all Nagas in all areas and all aspects of agreed competencies, “and it cannot be misconstrued/interpreted as Union of India”.
It stated that the “Naga National flag” is the symbol of the recognized Naga entity. “It is the covenant of God with the Naga people and the commitment of the Naga people to God,” the NSCN-IM said, adding, “The constitution of the Nagas is the book form of the recognized sovereignty and mutually agreed competencies”.