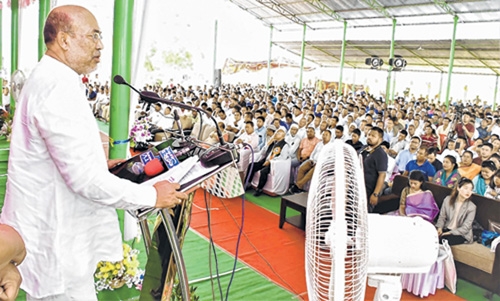 Imphal, Oct 5 (DIPR)
Chief Minister N Biren Singh inaugurated a new staff quar-ters building of Community Health Centre, Yairipok Yambem and an Under Graduate Girls’ Hostel at Top Chingtha under Andro Assembly constituency in Imphal East district today.
Speaking at the inaugural function of the CHC staff quarters at Yairipok Yam-bem, the Chief Minister stated that the Yambem PHC has been upgraded to the status of a Community Health Centre as per a Cabinet decision.
He assured that doctors, nurses and staff required at the CHC will be looked into and the requisite staff would be sent as early as possible. The Govt will look into the feasibility of upgrading Yambem Aided High school to a full fledged Govt High school. He also stated that the State's financial position has been improving gradually.
Forest and Environment Minister Th Shyamkumar said he is optimistic that the Chief Minister will definitely provide the required infrastructure and manpower of the CHC. He also said that Yambem Aided High school which was constructed under the funding of Ministry of Minority Affairs, Govt of India should be taken over by the Govt. for the welfare of students’ community.
Speaking at the inaugural function of the Under Graduate Girls’ Hostel at Top Chingtha, the Chief Minister stated that the Govt has taken up mass tree plantation programme under the CM’s  Green Manipur Mission in order to reduce to the adverse impacts of global warming. Under this mission, Govt made an appeal to donate five to ten acres of land for tree plantation in each and every village.
The Chief Minister assured that the right side main canal of Thoubal Dam would be made fully functional at the earliest. SDC Tulihal office which was shifted to Imphal due to law and order situation would be brought back to its own place.
Biren stated that the ‘Go to Hills’ mission had bridged the gap between hill and valley people and strengthened the sense of oneness. On the other hand, the ‘Go to Village’ mission enabled the Government to understand people’s woes, grievances and necessities.
Now ‘School Fagathansi’ mission has been launched with an ambitious objective to provide free and quality education to students, he said and expressed hope that the new mission would certainly benefit thousands of students.
Stating that major chunk of parents’ earnings is generally spent in children’s education, the Chief Minister expressed hope that parents would now be able to save their hard earned money for their future.
The State could achieve marked changes in school education sector in the last two years and the overall pass percentage in HSLC examination touched an all-time high of 74.69% which is the highest since establishment of BOSEM in 1972.
Many people have benefited from various welfare schemes introduced by the present Govt like CMHT, CMST, Meeyamgi Numit, Hill Leaders Day and Go to Village, he added.
Forest and Environment Minister Th Shyamkumar, Deputy Speaker K Robindro Singh, Chairman, Manipur Building & Other Construction Workers’ Welfare Board, H Dingo Singh, and Vice Chairman, MIDA O Lukhoi Singh also spoke at the occasion.
Later, dignitaries planted tree saplings in and around the Nongpok Ningthou Panthoibi Sanglen.
DC Imphal East Dr Rangitabali Waikhom, Director, Minority Affairs Ng. Uttam Singh, Grand Ambassador (Green Mission) Valentina Elangbam and South Korean  DJ Soda also attended the function organised by the Department of Minority Affairs.