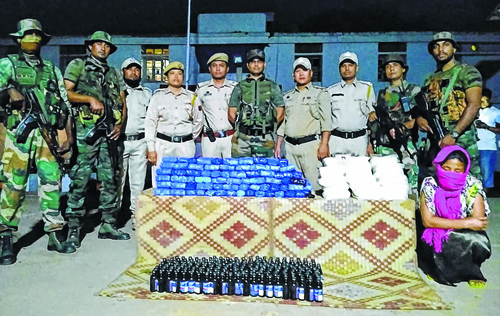 By Our Staff Reporter
IMPHAL, Oct 5: A huge quantity of contraband drugs worth Rs 28 crore appro-ximately have been seized from the border town of Moreh by troops of Assam Rifles.
Acting on a specific information, troops of 43 AR, assisted by Moreh police including women police personnel, carried out a search operation inside a house located at Phaicham Veng, Moreh this afternoon.
Initial search of the house lasted for almost 40 minutes, but no contraband substances were recovered.
Later, two packets of WY tablets were recovered underneath a bed.
Taking a lead from this recovery and bad smell coming from the house, a thorough search was carried out again after breaking apart the house’s wooden wall and roof ceiling.
This effort led to recovery of huge quantities of contraband drugs hidden inside the wooden walls and the ceiling.
Altogether 504000 numbers of WY tablets, 15.269 Kgs of Crystal Ice Methamphetamine, 2.206 Kgs of Ketamine and 194 bottles of Phensedyl were recovered from the house.
Moreover, Rs 75,150 and 49,000 Myanmarese Kyats were recovered from the house in cash.
The owner of the house identified as Vahjahat Haokip w/o late Kamnit has been arrested.
Vahjahat Haokip also disclosed that the seized drugs belong to two women identified as Matazin and Namkhohat who are residents of Tamu, Myanmar.