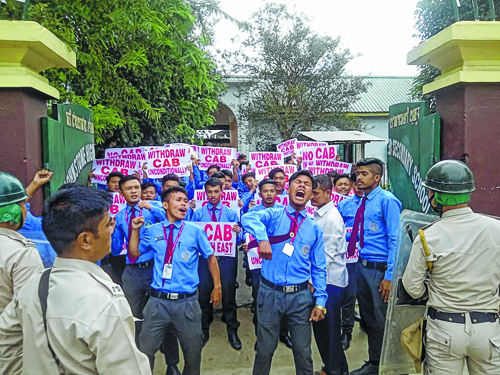 IMPHAL, Oct 5
The Manipur People's Against Citizenship Amendment Bill (MANPAC) has strongly condemned the act of some school authori-ties who prevented students from organising/taking part in human chain protest on October 3, terming it as a violation of the democratic rights of the people.
MANPAC also condemned the failure of All India Radio, Imphal to mention a single word about the huge mass protest staged all over the State on the said day in their evening news broadcast, but appreciated other media houses and fraternity for properly covering the news.
A statement issued by the core committee of MANPAC today conveyed that following the intense demand for the implementation of an ILP system in the State to save the indigenous people from the threat posed by the unchecked influx of outsiders, the Manipur People Bill 2018 was passed by the Manipur State Assembly.
However, the Bill is yet to get any form of assent from the President of the country, it mentioned adding that at such a critical juncture, no people of the region, in their right mind, would agree to the Citizenship Amendment Bill (CAB).
Stressing on the recent scrapping of Article 370 and Article 35 A from Jammu and Kashmir by the Centre which is regarded by many as a direct threat to democracy, MANPAC cautioned politicians, MLAs and Ministers of the State that if CAB is passed forcefully, its adverse impacts will fall upon all, including them.
Demanding all the authorities concerned to immediately stop giving false assurance and promises to the people, it warned the Central Government that if it fails to respect the sentiments of the people of Manipur, the end result will not be a good one.
It is high time for all to come together and adopt a resolution against this threat, it added.
Brushing aside the so called promises by the leaders of the Central Govern- ment to include a clause for protection of the people of the North East and Manipur, MANPAC appealed to the people of all communities to realise who the real enemy is andto stay alert against any attempt to create mistrust and hatred among the people.
It also appealed to the State Government to let go of its attitude of seeing the CSOs and the people in the wrong light whenever they rise in protest as well as to stop the practice of using force to subdue the people.
On the other hand, MANPAC expressed gratitude to the women vendors of Khwairamband Keithel, leaders, students of various schools, colleges and institutions, CSOs as well as the general public who took part in the protest on October 3 and added that MANPAC will continue its protest against the CAB.