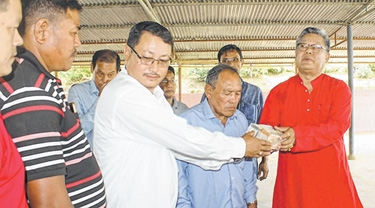 By Our Staff Reporter
IMPHAL, Oct 6: CAF&PD and Revenue Minister Karam Shyam today distributed his MLA Local Area Develop-ment Fund (MLADF) to beneficiary committees of 16 polling stations at a function held today at Chajing Mairenkhong community hall.
Speaking at the gathering, Karam Shyam stated that it is of paramount importance for every politician to keep their words and not to betray people’s trust.
It is also crucial for a politician to execute all public works in a transparent manner and ensure that all the people get their due shares and opportunities, Shyam said.
“Guided by this conviction, I’m distributing the MLADF to people in front of media”, he said.
Recalling that he was elected to the Manipur Legislative Assembly for the first time from Langthabal AC in 2012, the lone LJP legislator also remembered that assurances he gave to the people of Langthabal AC in the run up to the election.
He went on to claim that he has been translating all the assurances into action one by one and PDS items are being distributed to beneficiaries without wasting a single kilogram.
“MLADF is also being distributed to the people through beneficiary committees and I have been helping needy people at my best level”, he claimed.
MLADF for 2017-18 and 2018-2019 was Rs two crore each. For the current financial year, Rs one crore has been sanctioned.
Out of this Rs one crore, Rs 75 lakh has been distributed to 11 polling stations. Moreover, five polling stations which were left out from distribution of MLADF  in the past have also been given their due shares today, Shyam said.
MLADF was utilised properly in the past although there were a few complaints, he said.
He then appealed to all the beneficiary committees to utilise the MLADF distributed today properly and in constructive manner.
He further appealed to all concerned to ensure that  there is no sore feeling among the people over utilisation of MLADF.
Referring to media reports about distribution of underweight LPG refills and refilling of fuel below the volume purchased, Karam Shyam said that he has demanded a detailed report from IOCL.
Earlier, Shyam inaugurated four waiting sheds built at Langthabal Khoupum under MLADF.