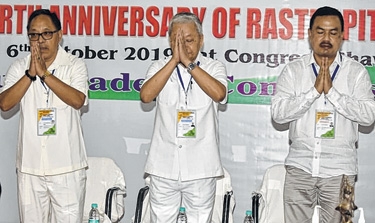 By Our Staff Reporter
IMPHAL, Oct 6: In connection with the 150th birth anniversary of Mahatma Gandhi, a one-day seminar was held today at Congress Bhavan under the aegis of MPCC.
Speaking at the inaugural session of the seminar, MPCC president Gaikhangam said that those people who assassinated Mahatma Gandhi, the champion of peace and non-violence, unmistakeably exposed their tendency towards mankind through the same heinous act.
Prof Ksh Bimola of MU, Dr M Ramananda of Kirori Mal College, DU, Dr Th Bharat of CSSEIP, MU, and Prof Chinglen Maisnam of MU spoke at the seminar as resource persons.
Gaikhangam asserted that Mahatma Gandhi was a great soul who advocated peace and non-violence all his life. Mahatma Gandhi’s philosophy of non-violence is becoming more and more relevant in the contemporary world which is plagued by violence of varying degree and nature.
Mahatma Gandhi was a very rare leader of the entire humanity who lived by his words.
Even though Mahatma Gandhi believed in Hinduism, he treated all religion equally and there was nothing sectarian in all his perspectives, Gaikhangam remarked.
By assassinating Mahatma Gandhi, the killers only exposed that they believed in violence. No one who believed in non-violence would ever think about killing Mahatma Gandhi, the champion of peace and non-violence, he asserted.
Even though most of the teachings and messages of Mahatma Gandhi are challenging, his philosophies and beliefs like ‘truth always triumphs’ are being studied across the world.
However, some organisations of the country have been working hard to influence the masses to reject Mahatma Gandhi’s philosophy and teachings, decried the MPCC president.
The seminar was attended by Congress MLAs, ex-MLAs, party leaders and a number of students.