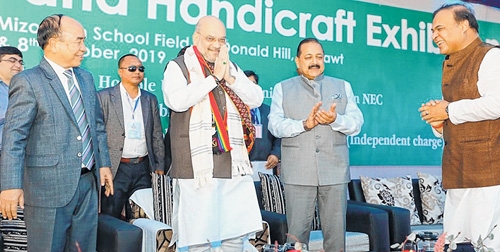 Aizawl, Oct 6
Union Home Minister Amit Shah on Saturday assured Mizoram Chief Minister Zoramthanga that Citizenship Bill will be suitably tweaked to safeguard the interests of the State amid fears that the legislation will result in "illegal immigrants flooding the State".
Shah said that he will ensure that the CAB does not override a long-standing provision that checks the unabated entry of outsiders into the State. He placed special emphasis on protecting Mizoram's Inner Line Permit (ILP) in his meetings with Zoramthanga and top leaders of civil society groups.
"As far as the Citizenship Amendment Bill is concerned, the Home Minister has assured that a new clause (related to the Inner Line Permit regime in Mizoram) will be incorporated in the draft Bill. We will work this out with the Home Ministry," Chief Minister Zoramthanga, who heads the Mizo National Front Government in the State, told reporters after his meeting with Amit Shah.
The CM had in the interaction warned the Home Minister that the Citizenship Amendment Bill, 2019 could open a "floodgate of illegal immigrants" in Mizoram, an official statement said. Zoramthanga met Shah, who is also the BJP National president, at the Raj Bhavan here and the two leaders discussed several other issues.
The meeting ended on a “positive” note and Shah assured Mizoram would be empowered with more provisions for their safety if the CAB is enacted.
This was Shah's first visit to Mizoram after assuming office. In his address to a huge gathering, Shah avoided the issues of the National Register of Citizens (NRC) and the Citizenship Amendment Bill (CAB), which had led to protests in the State recently.
Recently in Kolkata, Shah had declared that the party will “throw out all infiltrators one by one” by enforcing the NRC. He simultaneously clarified that no Hindu, Sikh, Jain or Buddhist need to worry because they will be accorded Indian citizenship beforehand with the passage of the Citizenship (Amendment) Bill.
Shah made a distinction between Hindu, Sikh, Jain and Buddhists whom he classified as “refugees” while presumably consigning Muslims to the “infil- trator” status and threatening them with eviction.
Several NGOs and other organisations under the banner of a coordination committee recently intensified the agitation against the visit of Shah saying that the implementation of the Citizenship Amendment Bill will affect Mizoram and other parts of the North East.
Shah who visited Mizoram with a day long programme highlighted the major initiatives taken by the BJP-led NDA Government at the Centre for the development of Mizoram and other parts of the North East.
"During the tenure of Prime Minister Narendra Modi we have taken out bamboo from the list of forest resources and this is going to help the entire North East region by boosting the handicraft sector," said Shah.
The Home Minister said that the Government led by Prime Minister Narendra Modi had taken several steps for the development of Mizoram in the past five years which includes the inauguration of the 60 MW Tuirial hydro power project, providing rail connectivity to Vairabi in Mizoram, opening of border haats with Myanmar and steps to open the Kaladan multi model project. He said that while the erstwhile Congress Government had given only Rs 19,974 crore to Mizoram under the 13th Finance Commission, the State was given Rs 42,972 crore under the 14th Finance Commission. News18