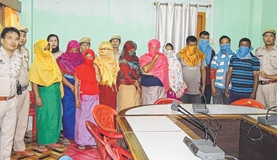 By Our Staff Reporter
IMPHAL, Oct 7: Altogether 11 people including four women have been pulled up by Bishnupur district police for mob violence.
The 11 individuals have been pulled up for harassing and physically assaulting a man, a woman and her daughter at Kha Postangbam, Bishnupur district yesterday morning.
As soon as they received information about the incident, Bishnupur police rushed to the scene and rescued the victims.
After registration of an FIR, 11 people involved in assaulting the trio were arrested, the Bishnupur SP told media persons today.
Apart from IPC Sections 147/341/352/354/506 and 34, Section 75 of JJ Act has also been invoked against them as they were seen physically assaulting the minor daughter too in video clips circulated in social media, said the SP.
Even if the man and the woman had committed an offence, there is law to take care of them but mob violence of any kind is not permitted by law, said the SP.
On the other hand, sources informed that the woman and the man were rounded up for alleged engagement in amorous acts in public place.
Yet, a mob not only harassed the man and the woman but also ill-treated the woman’s minor daughter, said the sources.
The eleven who have been rounded up are, Keisam Chandrakala Devi (54) of Kha Potsangbam Maning Leikai, Potsangbam Bijenti Devi (45) of Kha Potsangbam Mayai Leikai, Tourem ongbi Guneshwori Devi (42) of Kha Potsang-bam Mamang Leikai, Nongmaitehm Dhamu Singh (35) of Kha Potsangbam Mamang Leikai, Oinam Shanti Devi of Upokpi Khunou, Salam Manisana Singh (35) of Upokpi Khunou, Potsangbam Hemachandra Singh (37) of Kha Potsangbam Mamang Leikai, Kangabam Inaocha Devi (46) of Kha Potsangbam Mayai Leikai and Oinam Premkumar Singh (36) of Upokpi Khunou.