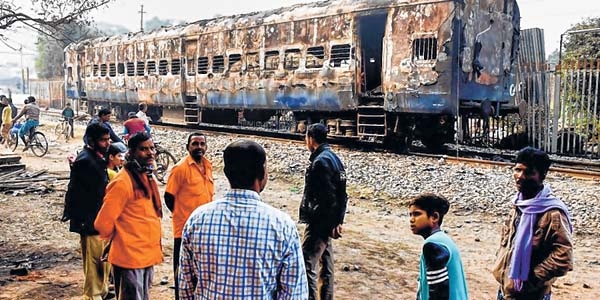 KOLKATA, Dec 14
Bengal continued to face the heat of amended Citizenship Act on Saturday as violent protestors set two trains ablaze in Murshidabad district and torched at least four buses of the State Transport department on Kona Expressway in Howrah, on the outskirts of Kolkata, the cabin and ticket booking counter at Sankrail railway station in Howrah were also set on fire.
Two express trains stationed at Krishnapur and Lalgola railway stations were targeted by violent protestors and a few compartments of both the rakes were set ablaze.
Traffic movement is suspended on Kona Express- way for over four hours from 12.30 pm, the arterial thoroughfare that connects the city with two National Highways, as the agitators put up roadblocks before they torched four government buses.
They pelted stones when a contingent of police personnel arrived at the spot.
According to police, the incident took place around 12.30 when a group of agitators shouting slogans against the amended Citizenship Act squatted on Kona Expressway and the assembly turned violent.
They broke open the fuel tanks of the buses, sprinkled the fuel on the vehicles before setting them on fire.
During the course of Saturday’s violent protests, a toll plaza on the National Highway 34 at Suti in Murshidabad was set on fire and protestors went on rampage at Sujnipara railway station in the same district.
At Sankrail railway station in Howrah, a strong mob of 200 protestors rammed into one of the cabins and went on rampage, the railway police said.
"The group brought fuel and splashed it on the gadgets in the cabin and set it ablaze. Another group of agitators stormed in the ticket booking counter, drove out the employees before setting the room on fire," said an official of Government Railway Police (GRP).
The protestors also blocked roads in several parts of the state leading to disruptions in vehicular movement and train services.
Following the incident, Kolkata Mayor Firhad Hakim appealed for peace and urged protestors not to indulge in violence.
He said, "I urge my friends not to indulge in violence. The unrest will only make the BJP stronger. The vandalism is affecting the people of Bengal. The fight is not Hindus vs Muslims. We need to fight against the NRC and CAB as Indians".
"Few people are fueling this unrest, don't fall for it. Don't bring trouble to the people of Bengal. If you really want to protest then join Mamata Banerjee' rally in a civil way," he added.
Demonstrations and roadblocks were staged in different districts, including Birbhum, Malda, North 24-Parganas, Nadia and Murshidabad, across the State on Saturday.
The pockets where trouble broke out on Friday and Saturday are dominated by Muslims, who are believed to be Trinamool Congress supremo Mamata Banerjee’s strong electoral support-base. Bengal Governor Dhankar reacted to the violent protests in Bengal and tweeted, "Distressed and pained at events unfolding in the State. Chief Minister as per oath has to ‘bear true faith and allegiance to the Constitution of India.. and I as a Governor will to the best of my ability preserve., protect and defend the Constitution and the law".
On Friday, violent protestors set railway tracks at Uluberia in Howrah and Beldanga in Murshidabad railway stations on fire by using tyres, an hour after Chief Minister Mamata Banerjee announced that mass movements would be organised across the State protesting the amended Citizenship Act.
Chief Minister Mamata Banerjee, on Saturday, urged the people of the State to organise a movement against the new Act in a democratic way. The State Government released a video, which was telecasted in regional news channels, in which Mamata urged the protestors to be restrained and assured that the National Register of Citizens (NRC) and amended Citizenship Act would not be implemented in Bengal. The culture clan of Bengal, too, asked people to maintain peace.  Express News Service