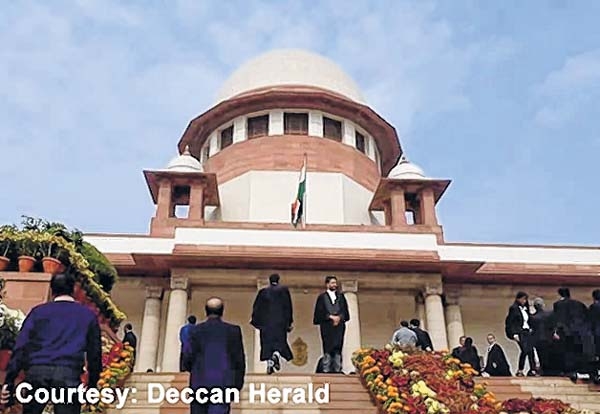 AGARTALA/NEW DELHI, Dec 16
The Supreme Court will hear the pleas including that of Tripura royal scion Pradyot Kishor Debbarma challenging the Constitutional validity of the Citizenship Amendment Act (CAA), 2019 on December 18.
An apex Court bench, headed by Chief Justice SA Bobde, said they will hear the pleas along with other pending matters coming up for hearing on December 18.
Tripura royal scion and chairperson of the Joint Movement Against Citizenship Amendment Bill (JMACAB) has filed a petition in the Supreme Court challenging the new Citizenship Law.
After granting the petition for hearing, Pradyot Debbarma tweeted: “Grateful to the Hon’ble SC that it has listed my matter on Wednesday.”
“I will do my best to ensure that the concerns of the North East and Tripura on the Citizenship Act are brought to the attention of the SC,” he added.
Pradyot Debbarma, who is a former Tripura Congress president, also thanked his counsel Dr Abhishek Manu Singhvi for representing his side in the fight.
Experts said the petitions contended that the impugned Act violates the fundamental guarantees under Article 14 as also Article 21 of the Constitution.
Experts are also of the view that the impugned Act has been enacted disregarding the Report of the Joint Parliamentary Committee, dated July 1, 2019, as also the terms of the Assam Accord which was signed in 1985.
According to the Assam Accord, foreigners, who came to Assam on or after March 25, 1971, shall continue to be detected, deleted and expelled in accordance with the law.
But the Citizenship Amendment Act (CAA), 2019 has cleared a path for religious minorities from Pakistan, Bangladesh, and Afghanistan to get Indian citizenship who came on or before December 31, 2014. The religious minorities were listed as Hindus, Sikhs, Buddhists, Jains, Parsis, and Christians.
Parliamentarians, activists, NGOs, former top officers, and several other people have filed petitions in the Supreme Court, challenging the CAA, 2019. The Citizenship Amendment Bill (CAB), 2019, has become an Act after President Ram Nath Kovind gave the assent to it on Thursday.
Some of the petitioners include the tribal wing of the CPI-M, Congress, All Assam Students’ Union (AASU), Peace Party, Rihai Manch, Citizens Against Hate, Ehtesham Hashmi, the Jan Adhikaar Party, law students from the Symbiosis Law School and others.
He also appealed to the protestors not to attack the Bengali-speaking community and refrain from involving in any kind of violence.
“Also please don’t resort to any violence – your anger should not be directed towards the Bengali speaking community please realise that our own Political leaders have betrayed us they are the ones who have spoken in one language before elections and are silent now,” the royal scion said.
NE Now