Anti-CAA protests, death toll climbs to 15 in UP Five people were killed in Meerut, two each in Kanpur, Bijnore and Firozabad and one each in Muzaffarnagar, Sambhal and Varanasi. An eight-year-old boy was killed in Varanasi after a lathi-charge by police 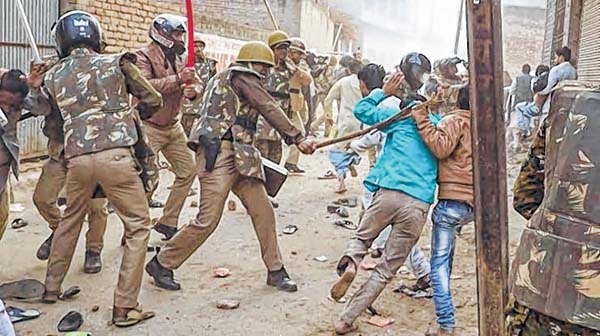 Meerut/Lucknow/Kanpur, Dec 21
A man died in Uttar Pradesh’s Rampur town in renewed protests against the Citizenship Amendment Act (CAA) on Saturday, police said, lifting the death toll to 15 after Friday’s violence in several parts of the state.
Protesters in Rampur clashed with the police on Saturday as they pelted stones and resorted to arson during the violence, which lasted for two hours, according to officials.
Additional central para-military forces were rushed as the violence erupted after the administration denied permission for a demonstration following a call for protest by Muslim clerics.
UP Governor Anandiben Patel appealed to people to maintain peace in the State and said the Government will protect every citizen.
“Such protests yield no result but destroy the public property and harm people,” she said in a press communique.
Earlier in the day, Chief Minister Yogi Adityanath met the Governor and apprised her of the situation across the state.
A 28-year-old man had died in Lucknow in Thursday’s violence.
All the five people who died in Meerut had bullet injuries, doctors have said.
“Zaheer, Mohsin and Noor Mohammed were brought dead yesterday (Friday). One Asif had died here yesterday. And another Asif died during treatment late in the night,” Meerut Medical College and Hospital’s chief medical officer, Dr Harsh Wardhan, said.
“Apart from them, several from nearby districts have been sent here for treatment… And one police constable Mohit Sharma,” Dr Harsh Vardhan said.
The doctor also said that the three personnel of the Rapid Action Force have been discharged after treatment and so was the woman police personnel.
Mohammad Sagir, the eight-year-old boy who succumbed to his injuries suffered in the stampede during clashes in Varanasi, was buried amid tight police security on Saturday morning.
Sagir was playing in the narrow lane when the stampede happened in Bajar- deeha area of Varanasi after the police baton-charged protesters.
District Magistrate Kau-shal Raj Sharma has said he has spoken to senior authorities for compensation to the family  of the child.
The large-scale violence and arson erupted in several districts of the State soon after the Friday prayers despite a massive deployment of police and clampdown on internet.
“The police is keeping a strict vigil on unruly elements and has arrested 150 people while 36 have been detained for questioning in Lucknow,” Inspector General of Police (Law and Order) Praveen Kumar said.
Officials said the clampdown on internet services was extended to seven more districts, taking the list to 21 in the State, till further orders.
Hundreds of people, including women and social activists, were arrested in the districts across the State as police increased vigilance in areas prone to violence.
In Meerut range comprising six districts of Meerut, Bagpat, Hapur, Bulandshahr, Ghaziabad and Gautam Buddha Nagar, 102 people were arrested and 10 cases of rioting and arson were lodged, officials said.
Police in Saharanpur range with three districts of Saharanpur, Shamli and Muzaffarnagar said 70 people were arrested after the violence. However, the vice-president of Jamaiya-e-Ulema Hind Maulvi Mukaram said police have arrested more than 100 people.
Police in Kanpur have arrested 40 people and lodged 12 first information reports (FIRs) against 15,000 unidentified people in 10 police stations under various sections of the Indian Penal Code (IPC).
Officials said the National Security Act (NSA) could be invoked against the protesters.
In Prayagraj, cases have been registered against 10,000 unidentified people for violating prohibitory orders under Section 144 of the Code of Criminal Procedure (CrPC).
“The situation is under control. As a preventive measure, police have been deployed in sensitive areas,” Prayagraj’s District Magistrate Bhanuchandra Goswami said.
Varanasi’s District Magistrate Kaushal Raj Sharma visited the violence-hit areas on Saturday morning.
“Contact with religious leaders has been established. The situation is normal and police have been deployed to maintain peace and harmony,” he said.
“After identification, NSA has been slapped against four persons,” Senior Superintendent of Police Prabhakar Chaudhary said.
Meanwhile, an uneasy calm prevailed in Bajardeeha area of the temple town, where a stampede took place following Friday prayers.
Sources in various hospitals said that the condition of two out of four injured during the stampede is critical.
The Government has deployed central paramilitary forces and the Rapid Action Force in all the sensitive areas in the State as prohibitory orders and suspension of mobile internet continued on Saturday. All educational institutions across the State also remained closed on Saturday.         Hindustan Times