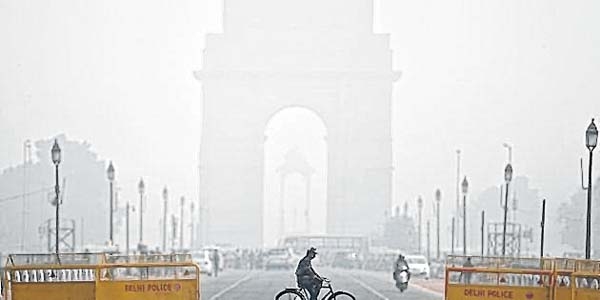 New Delhi, Dec 30
Delhi and its neighbouring areas were shrouded in a thick blanket of fog on Monday morning, resulting in disruptions in rail traffic. Airlines issued an advisory urging passengers to stay in touch to get updated flight information.
At least 30 trains are running late due to low visibility in the Northern Railway region, reported the news agency ANI.
Also, 500 flights were delayed and 21 were diverted from Delhi airport this morning due to heavy fog, reported ANI.
Flights are operating at the airport under CAT III B conditions, which means that the runway visual range (RVR) is between 50 metres and 175 metres. Giving an update on flight operations at 7 am, the airport official said there was dense fog but no “flight has been cancelled” yet.
In another development, six people, including two minors, were killed when their car skidded off the road and fell into a canal in Uttar Pradesh’s Greater Noida, which borders Delhi, apparently due to fog, police said on Monday.
At 5.30am this morning, the India Meteorological Department (IMD) recorded 4.6 degree Celsius at the Safdarjung observatory, which is considered the official marker for the city.
Meanwhile, the air quality continued to deteriorate, straying further into the ‘severe’ category. Scientists at the IMD said that this deterioration was primarily because of a thick cloud cover over the city, coupled with low wind speed and high levels of moisture in the air, which was trapping pollutants closer to the surface.
Delhi on Sunday registered its 16th successive “severe cold day”, the longest spell of such weather conditions in December in the past 22 years, according to the India Meteorological Department (IMD) said.
Scientists said Delhi residents will get some relief from Monday as temperatures are expected to rise by a few degrees. This will be because of a change in the wind direction from northwesterly to easterly. Hindustan Times