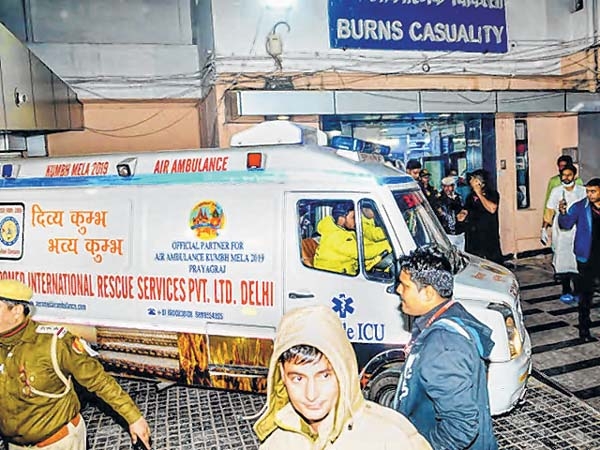 NEW DELHI, Dec 7
A 23-year-old rape victim died in a hospital in India's capital two days after she was set on fire by a gang of men, including her alleged rapist, the doctor treating her said.
The woman was on her way to board a train in Unnao district of northern Uttar Pradesh to attend a court hearing when she was doused with kerosene and set on fire on Thursday, according to the police.
The attack, the second significant case of violence against women in the past two weeks, has sparked public outrage in India.
The woman died on Friday after suffering a cardiac arrest, Dr Shalabh Kumar, the head of burns and plastic department at New Delhi's Safdarjung Hospital told Reuters News Agency.
"She was having 95 percent burns," he said, adding that the woman's windpipe was burned and "toxic and hot fumes" had filled her lungs.
The woman had filed a complaint with Unnao police in March, alleging that she had been raped at gunpoint on December 12, 2018, police documents showed.
Having been subsequently jailed, the alleged rapist was released last week after securing bail, police officer SK Bhagat said in Lucknow.
Uttar Pradesh is India's most populous state and has become notorious for its poor record regarding crimes against women, with more than 4,200 cases of rape reported there in 2017 - the highest in the country.
This case is one of the latest high-profile sexual abuses reported in recent days.
On Friday, Indian police shot and killed four men who were suspected of raping and killing a 27-year-old veterinarian near Hyderabad city, an action applauded by her family and many citizens outraged over sexual violence against women.
But many were also concerned that police had overreached in shooting the alleged suspects without any trial.
More than 33,000 women were raped - an average of some 90 rapes reported each day - in India in 2017, according to the figures released by the National Crime Records Bureau (NCRB).
But the real figure is believed to be far higher as many women in India do not report cases to police due to fear or shame.
The NCRB data also shows that more than 90 percent of cases of crimes against women were pending in courts across the country.
Earlier this year, the BJP government in Uttar Pradesh was widely criticised by the opposition parties who accused it of protecting a party legislator charged with raping a 19-year-old woman in the same Unnao town. Al Jazeera & agencies