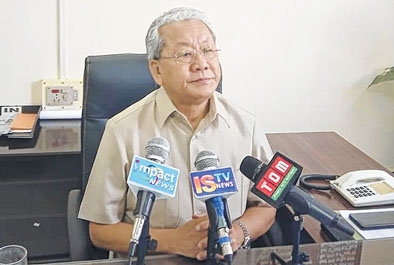 By Our Staff Reporter
IMPHAL, May 16: As an Opposition party, it is only natural for Congress to take full advantage of the unfolding situation if the BJP-led coalition Government collapses on account of dissent among the coalition partners, asserted MPCC president Gaikhangam.
He said that if the Congress party fails to capitalise on such a situation, the party would definitely face the anguish of the people.
Speaking to media persons at Congress Bhavan here today, Gaikhangam who is also a Member of Congress Working Committee (CWC) said that Congress party neither encourages defection by MLAs nor does it have any intention to topple a Government just because it is sitting on the Opposition bench.
However, it is only natural for Congress party to make necessary political manoeuvres if the incumbent coalition Government collapses from within due to dissent and discord among the coalition partners, Gaikhangam said.
Such a manoeuvre should not be interpreted as driven by thirst for power but the same manoeuvre is necessary in order to fulfil people’s wish and aspirations, he claimed.
He remarked that the State’s incumbent coalition Government is perhaps the first in the whole world which does not have a name. The coalition Government does not have a name nor any common minimum programme.
In the absence of any common minimum programme, all the coalition partners have been working in the interests of their own parties which only led to deep cracks within the coalition, he remarked.
According to rules, the single largest party should be invited first to form Government but Congress party was not given any such opportunity by the Governor. On the contrary, the Governor favoured the party which managed to win alliance of multiple parties, Gaikhangam recalled.
At that time, other political parties did not ponder over which party would best serve the interest of Manipur and many of the MLAs even overlooked the fact they are people’s representatives.
There was neither pre-poll alliance nor post-poll alliance among the coalition partners of the incumbent Government and now many of the coalition partners are disappointed, he claimed.
It appears that the powers and dividends of the Government are limited to a very small circle. That is why, voices of dissent have been growing louder and louder. As for the Congress party, there is no political party with which it cannot work together, Gaikhangam continued.