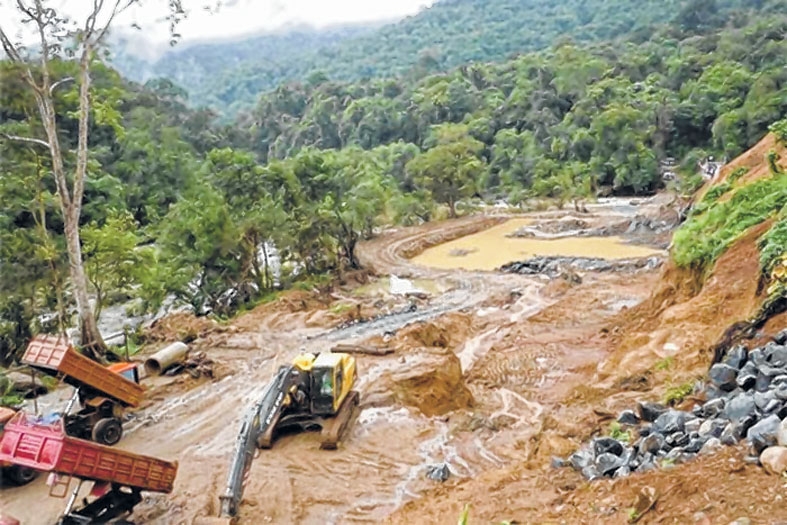 GUWAHATI, Jul 21
India’s greenest region, the north-east has been consis-tently losing tree cover over the last 18 years. The loss has been doubled in the last five years, according to the data mapped by Global Forest Watch, a repository of forest data worldwide.
The statewise data available with DH shows that the loss of tree cover in north-east India amounts to over 70% of all tree loss in India that occurred between 2001 and 2018. Net loss of tree cover between 2000 and 2018 in India is 16,744 sq km. Out of this, 12,523 sq km, a whopping 74.7%, is from the north-eastern states of Assam, Arunachal Pradesh, Meghalaya and others.
Data shows that 6,867.57 sq km of tree cover got eroded in the period between 2013 and 2018, the period coinciding with NDA rule at the Centre. This is a little less than half of the loss occurred between the period of 2001-2018.
Assam tops the chart for the period between 2001 and 2018 with 2388.46 sq km tree cover loss, while Mizoram lost maximum trees between 2013 and 2018, amounting to an area of 1392 sqkm.
A chart made using the data shows that the tree cover loss almost doubled in the last five years, during the NDA rule.
The tree cover loss data set includes annual loss for each calendar year, between 2001 and 2018. Created by the University of Maryland (UMD) using Landsat imagery and remote sensing algorithms to identify dense green area, the data maps primary forest at 30-meter resolution, with no minimum patch size.
Coal mining, industries and factories like cement plants planned on the hills of Meghalaya are primarily blamed for the forest cover loss in Meghalaya. "Those involved in illegal coal mines clear the forests first and then dig pits to extract coal without adhering to any environmental norms. The greed of money is prompting them to dig new pits inside thick forests in connivance with our politicians and bureaucrats," Agnes Kharsiang, an environment and RTI activist based in Shillong, the capital city of Meghalaya, told DH.
"The death of 15 miners in a rat-hole mine in East Jaintia Hills district in January last year triggered de- mand for closure of illegal coal mines but surprisingly Meghalaya Chief Minister Conrad K Sangma supported coal mine saying the closure will impact livelihoods,” she recalled.
“You can't justify the destruction of our forests and illegal cutting of the hills just because some people are earning money from it. We must completely close down such destructive practices and provide alternative livelihoods in order to secure the future for our next generation," she said.
"We are disturbing the lungs of our ecosystem by cutting trees and forests so haphazardly in catchment areas like Garo Hills in Meghalaya, Karbi Anglong hills in Assam or in many parts in Arunachal. As we are cutting trees on the catchment areas, silts flowing down the hills are raising beds of our rivers,” says Rathin Barman, deputy director of Wildlife Trust of India, posted in Assam, explaining how water retention capacity of the rivers dwindles and affects flood patterns.
The Northeast is one of the richest biodiversity hotspots in India. Barman says the destruction of forests has threatened wildlife. “We need better infrastructure but not at the cost of our ecology. We must teach this to our legislators so that the acts meant for such issues are strictly enforced,” he adds.
“The Northeast is known for the abundance of water but if destruction of forest continues like this, our region will also witness dry spells like the North or central Indian states like Madhya Pradesh or Maharashtra," he warns.
The Northeast is already feeling the heat of the forest cover loss. Mizoram’s capital Aizawl witnessed the highest temperature in the past 20 years, in May this year. The environmentalists blame the destruction of the forests as the reason for the floods almost every Monsoon, causing landslides and soil erosion. Kharsiang, an RTI activist, was attacked allegedly by those involved in illegal coal mining in November last year when she visited mining areas. She was seriously injured and is still undergoing treatment in Chennai.
"Temperature in Shillong is increasing gradually. This is mainly due to the loss of our forest cover. If this is not stopped, places like Shillong and Cherrapunji or any other tourist places in Meghalaya will lose the cool weather, for which tourists flock to our state during summer," Kharsiang said. As the Centre is implementing several infrastructure development projects in Arunachal Pradesh, bordering China, soil erosion and sediment flow to the downstream areas in Assam's Dhemaji and Lakhimpur districts is impacting agriculture fields and adding to floods and riverbank erosion. Nearly 2 lakh people have been affected by floods in the two districts this year too. Courtesy Deccan Herald