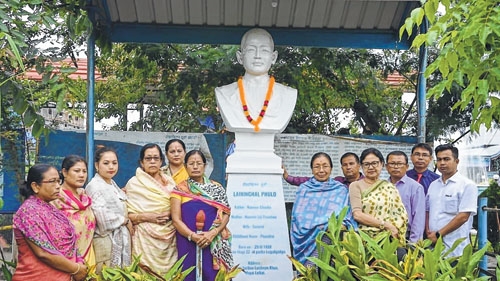 Our Correspondents
Bpr/Tbl, Aug 23: The 131st birth anniversary of Laininghal Naoriya Phulo was celebrated followed by an award distribution ceremony for successful students of class X and XII from Bishnupur district and winners of a written quiz competition organised for students of Phubala, at Loktak Maru community hall, Phubala today.
The function was organised by Chikhong Mari Phubala in which Phubala Up-Pradhan L Sundari, ward members of the GP, SDPO Moirang Ksh Sivakanta, Professor Dr Chinglen Meisnam of Economics Department, MU, DDK Imphal Assistant news editor Ch Birendra and Social Scientist Dr Dhanabir Laishram attended.
Resource persons of the function talked about Laininghal Naoriya Phulo's life to the students.
Meanwhile, winners of the General Knowledge quiz competition, which was attended by over 100 students of Phubala Gram Panchayat, were awarded during the ceremony.
24 students of class X and 22 students of class XII who passed the examinations conducted by BOSEM and COHSEM, of Phubala GP, were felicitated as well.
Professor Dr Chinglen Meisnam, while speaking on the occasion, maintained that students should be moulded by teachers and parents according to the change in time.
Maintaining that the role of parents/guardians towards their children have become big with time, he further urged the students to cooperate and interact with teachers and their parents more so as to build a healthy relationship on the long run.
With the advancement in all fields, teachers should encourage the imagination and creativity of students as well, he added.
Thoubal: The 131st birth anniversary of Laininghal Naoria Phullo was observed at MMRC Park Khangabok which was attended by Managing Director, K Blooming Hr Secondary School, Dr Romenkumar Khumanthem; Convenor Weaver Cell, BJP State, L Sorojini Devi; elders of Khangabok and students. They paid floral tribute and respect to the statue of Naoria Phullo at MMRC Park.