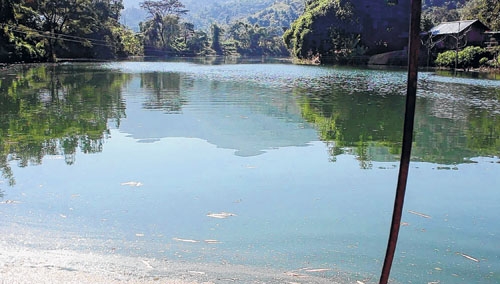 Our Correspondent
KANGPOKPI, Sep 23: Civil Society Organizations of Saikul Gamkai and ADC Sadar Hills member drew the attention of Chief Minister N Biren Singh over the unrest situation of Saikul area owing to Dolaithabi Barrage at Dolaithabi.
The CSOs Saikul had also submitted a memorandum to the Chief Minister in connection with the matter and urges him to initiate appropriate measures within a month in order to avert the impending dangers caused by the Dam.
It stated that Dolaithabi Barrage Project/Dam may be constructed primarily for the purpose of irrigation water to the downstream areas of the dam but blocking and retaining of water at the dam site have at the same time caused artificial flood on Zil (Iril) river all the year round since 2018.
The stagnant water filled the mouth of the Zil (Iril) river stretching upto Molkon village about 15/16 Kms from the dam site and such artificial flood and the swelling water level have started to affect the upstream areas in various ways, it added.
It also stated that both sides of the Zil river are mostly habitated by humans which depends on paddy fields situated along the river but the flooding water have started to cause damages on these areas which will be compounded in the days to come.
It will also cause serious environmental and ecological disturbances as plants/trees growing on both sides began to crumble and the odorous smell of the accumulated water will certainly give rise to several health ailment to the people of Saikul especially those residing nearby the river bank, the memorandum added.
It further stated that in the event of lifting the blockage or releasing the accumulated water, the receding water will cause soil erosion and landslide on both side of the Zil river which will lead to tremendous loss of usable lands.
Considering the facts, CSOs Saikul appeal Chief Minister N Biren Singh to take up necessary action and appropriate measures while cautioning that in case the Government fails to meet the humble appeal within a month, people of Saikuk CSOs will be compelled to take up any steps which is appropriate   for the issue.
Meanwhile, Thangkam Lupheng, Member ADC Hills District urged the Chief Minister to look in the grievances and hardships of the Saikul people and to do the needful at the earliest.
Powered By Sangraha 9.0