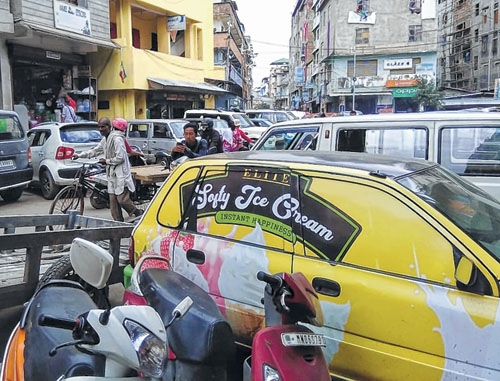 By Our Staff Reporter
IMPHAL, Sep 30 : The haphazard parking at Thangal Keithel and Paona Keithel is not only a source of headache for the commuters and people coming to the markets, but is also primarily responsible for the traffic congestion inside the already bustling market area.
In the case of Paona Keithel all the vehicles are made to park on only one side but at Thangal Keithel both sides of the road are used for parking, making the situation worse.
Making things worse is double parking by the sides of the road making passing through a nightmare for many.
The misery multiplies during peak hours in the already congested areas.
At BT Road, it is not uncommon to see vehicles, particularly the passenger ferrying vehicles, stopping anywhere they like, adding to the traffic confusion.
It is the same near Shamu Makhong and Jiribam parking.
Even though Traffic Control Police have marked many areas inside the markets as one way to control the congestion, failure to follow traffic regulations and absence of Traffic police personnel at many points have resulted in adding more to the traffic chaos and confusion.
On the other hand, failure to follow the one way norms by rickshaw drivers who transport goods and commodities for the shops present in the two markets, vans carrying school students and other heavy vehicles like Tata DI, also add to the congestion of the already crowded roads. For pedestrians it is also a nightmare as most of the footpaths are piled with goods from the nearby shops, making it impossible to use them while passing through the market areas on foot.