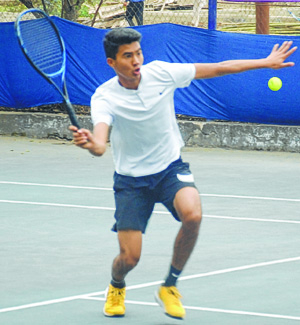 By Our Sports Reporter
IMPHAL, Jan 10 : Bushan Haobam will be meeting Bhicky S in the men's singles final of the CYLC Tennis Championship being hosted by CYLC, Chingamathak at its court under the aegis of Manipur Tennis Association.
Bhicky reached the final yesterday with a 7-5, 6-1 win against N Premjit while Bushan made it to the final after his rival Indrakumar retired injured. Bushan was leading 6-1 before Indrakumar was forced to retire.
35+ Doubles
Tuleshor and Kangjamba will lock horns with Premjit and Jiten for the 35+ doubles crown.
Tuleshor and Kangjambam earned the final berth by beating Pritam and Ashok 6-3, 6-1 today in the semi-final.
Pritam and Ashok who got the better of Santikumar and Robindro 9-5 in the second round clash managed a 9-6 win against Suraj and Ibohal in the third round to seal the semi-final berth.
Tuleshor and Kangjamba on the other hand sealed a close 9-8 (7-4) win against Aken and Ravi in the third round clash to book the semi-final berth. Earlier in the second round, Tuleshor and Kangjamba downed Arun and Premanda pair by the same 9-8 (7-4) margin. On the other hand, Aken and Ravi reached the third round by beating Manikanta and Prakash pair.
Meanwhile, Premjit and Jiten made it to the final with a 7-6 (7-4), 6-2 win against Rakesh and Iboton pair in the semi-final staged today.
Premjit and Jiten outlasted Pradeep and Balkrishna 9-3 earlier in the second round clash before edging out Rupam and Bona 9-7 in the last 8 stage.
45 + Doubles
The final line up of the 45+ doubles competition was also completed today with pairs of Tuleshor-Kangjamba and Dilip-Ibohal beating their respective rivals in the last 4 round clashes.
Tuleshor and Kangjamba eased past Prakash and Manikanta pair 6-1, 6-1 to reach the final after beating Ningtamba and Jayenta duo 9-2 in the second round clash.
Dilip and Ibohal then sealed a 6-3, 3-6, 10-8 win against Iboton and Rakesh in the third round to complete the final line up. Earlier Dilip-Ibohal duo clinched a 9-2 win against Romeo and Pradip to move into the last 4 round.