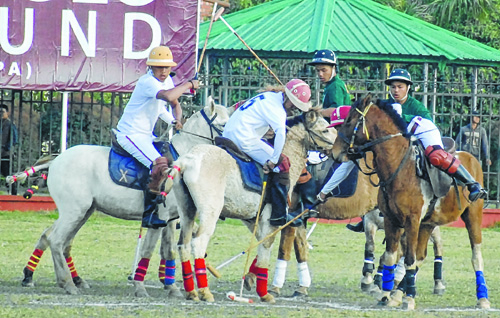 By Our Sports Reporter
IMPHAL, Jan 10 : X Polo Club thrashed Samurou Polo Club 8-1 while Nagamapal Youth Polo Club outshone Thoubal District Polo Association 9-1 to complete the final line up of the 3rd Junior Boys' (U-16) State Polo Tournament organised by All Manipur Polo Association at Mapal Kangjeibung.
In the first semi-final match of the tournament staged today, X Polo Club ran riot after a goalless first chukker to clinch a 8-1 victory against Samurou Polo Club.
Th Nongpoknganba took centrestage in the game as he fired home 5 goals alone including all three goals of the second chukker and two in the third chukker to make it 6-1 till the end of the third chukker.
T Dinesh also scored a goal for the winning side in the third chukker which saw Bikash grab a consolation goal for the Samurou side.
Samurou Polo Club which were put under pressure for major portion of the game failed to convert a single chance in the last chukker but T Vikash Singh and Herojit Thokpam added a goal apiece in the 5th and the 6th minute to wrap up the game 8-1 in X Polo Club's favour.
Elsewhere in the second semi-final match, Nagamapal Youth Polo Club (NYPC) came out all guns blazing to see off Thoubal District Polo Association 9-1.
NYPC led the first chukker 2-0 and went on to add three more goals in the second chukker before four more goals were being scored in the third chukker to make it 9-1. Kh Rivaldo and Santosh made the most score of 3 goals each while Kh Yaikhomba added twice, all in the second chukker before T Rivaldo added a single in the third chukker.
The lone goal of the losing side was scored by Pamheiba in the 6th minute of the third chukker before the two sides drew nil in the last chukker.