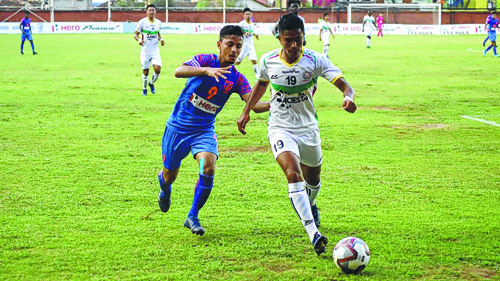 GOA, Jan 12
TRAU FC downed Indian Arrows 2-0 to register their second win in the I-League 2019-20 after a fiesty encounter at the Tilak Maidan stadium in Vasco, Goa, on Sunday.
Naocha Singh (45') and Princewell Emeka (81') scored to take the Manipuri side seventh with eight points from seven games while the Arrows languish at the bottom with four points.
For the hosts, Shanmugam Venkatesh made a couple of changes to the side that lost by a goal against Mohun Bagan. Aman Chetri and Harmanpreet Singh replaced Harpreet Singh and Manvir Singh. Whereas Dimitris Dimitriou made just the one change after his side's 2-1 win over NEROCA in the Imphal derby as Deepak Devrani made way for Sandeep Singh in the TRAU first 11.
It was until the last minute of regulation time in the first half that the visitors took the lead through Naocha Singh as he headed in a Angousana Luwang corner from the far end.
TRAU had a couple of good opportunities in the earlier precedings of the game, although Arrows goalkeeper Lalbiakhlua Jongte was at hand to block Emeka in the fifth minute and then dived to his right to deny Krishnananda Singh's attempt at goal in the 18th minute.
The Indian youngsters only had one shot in the entire half when Vikram Singh slipped inside the box and forced Mithun Samanta to pull off a save at his near post in the 39th minute.
Indian Arrows continued to struggle to find a way forward while they were left to defend for most of the second half that saw lesser chances created by TRAU as well, but until Emeka found the back of the net in the 81st minute by latching on to a pass by substitute Premjit Singh and slotting it through the feet of Jongte.        Goal.com