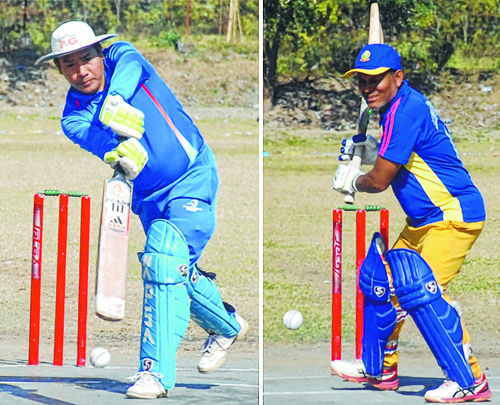 By Our Sports Reporter
IMPHAL, Jan 12 :  Mujibur Rahman punished DSU bowlers to hit a 60-ball 104 and helped LCCC, Chajing romp to a 93 run victory in a Group A rematch of the 4th T Subol Memorial Veteran T-20 Cricket Tournament at Langthabal Public Ground.
LCCC after winning the toss went for the batting and it was Mujibur Rahman brilliance that keep the scoreboard ticking with the batsman sending the balls mostly past the boundaries in his way to 104 runs off 60 balls. Shivadutta and Gulson also enjoyed the inning and added 25 and 0 runs each to help LCCC stack up a hefty 183 total for 4.
DSU's Mani managed two wickets in his 2 over spell while Maison took a single in 4 overs.
In reply, DSU managed to withstand LCCC bowlers but could gather only 90 runs for 9 in 20 overs to end the campaign with three straight losses. Brojendro (18), Somorjit (15) and Maison (14) were able to make the most significant contributions in this innings for DSU while the following order had short stays as Krishna of LCCC bowled well to collect three wickets in 4 overs.
Jilla of LCCC also helped his team keep the pressure on their rivals with his brilliant bowling and finished with two wickets in his name while Pratap and Shivadutta picked up a wicket each to ensure LCCC win the rematch held owing to an eligibility issue.
Mujibur Rahman who hit a ton was eventually named man of the match.
LCCC will face Model Club, Chingamakha in the last Group A league match of the tournament tomorrow.
Meanwhile in the last Group B league match, NAPSA, Kha Imphal eked out a narrow 2 run victory against YWC, Langthabal.
NAPSA posted 115 runs for 5 in first innings after YWC opted to field first before holding the latter team to 113 runs for 7 in their quota of 20 overs.
Ibobi of NAPSA led the scoring for NAPSA with 38 runs in his name while Bhogendro, Bipin and Ratankumar clinched 21, 14 and 12 runs respectively.
YWC's Sashi managed 3 wickets in this innings while Samanda picked up a wicket before they went down just 3 runs away from the target. Manaobi set the pace of the chase by scoring 32 runs followed by Kumarjit's knock of 21 runs but their effort went in vain as Bhogen was successful in breaking their batting line up in regular interval and finished with a haul of three wickets.
Mahesh also dented YWC chase by picking up two crucial wickets while Simon and Ratan managed a wicket each.