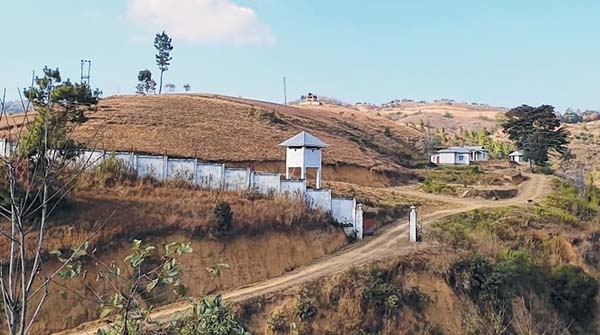 By Our Staff Reporter
IMPHAL, Jan 12: People of Tungjoy village, Senapati district located near the State’s border with Nagaland have a strong desire for an IRB post to be opened there in addition to early completion of the police station building being constructed in the village.
Tungjoy village has been in conflict with the neighbouring villages of Nagaland and there were even violent confrontations over land disputes. Even though the State Government started constructing a police station at the village since 2014, the building has not been completed till date.
Tungjoy village former chairman Th David said that it would provide a sense of security to the villagers if the construction of police station is completed.
Apart from the main building, construction of wireless room as well as the compound fence of the police station has not been fully completed.
In view of the repeated confrontations with Khezakheno village of Nagaland over land disputes, the villagers feel that they can lead secure a life if an IRB post is opened there in addition to the police station being constructed there, David said.
He said that Tungjoy villagers were beaten up by Nagaland Armed Police who have a post across the border whenever there was conflict between Tungjoy and Khezakheno.
The road leading to Khezakheno from Tungjoy  was dug out by Nagaland villagers during the Hornbill Festival held last year, said      the former village chairman.
Taking due note of the Ministerial team sent there by the State Government recently who assured that the land dispute would be resolved, David expressed keen desire for the State Government to translate its assurance into action at the earliest.
David said that there are just 4 Government teachers at Tungjoy Government High School even though 13 students of the school would be giving BSEM’s Class X exam this year.
In view of the acute shortage of teachers at the school, the village has been hiring six teachers at their own expense and the village has been paying salaries of Rs 10,000 each to Mathematics and Science teachers, and Rs 8000 each to teachers of other subjects every month, David conveyed.
He then appealed to the Government to appoint the required number of teachers for Tungjoy Government High School and also to construct staff quarters for the Primary Health Sub-Centre located there. Saying that the Government-aided Primary School of Tungjoy Khunou is being run at a private house by paying Rs 2000 every month as the school building is no longer usable, David urged the Government to construct a new building of the primary school. Even though an office of Assistant Engineer was opened at the village under PWD Senapati Division in 2003, not a single staff has been attending the office, David added.