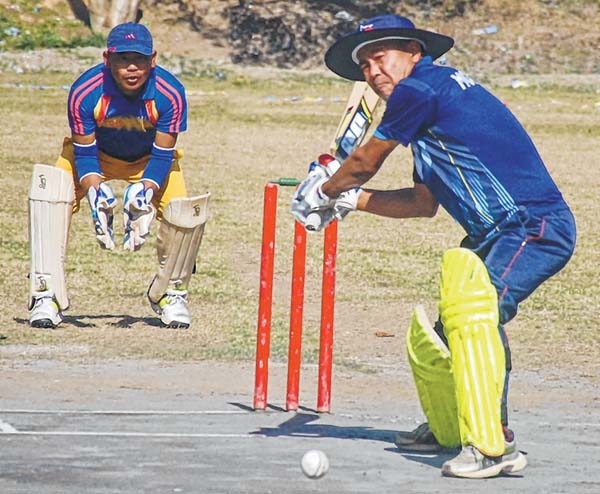 By Our Sports Reporter
IMPHAL, Jan 13 : Lilong Chajing Cricket Club (LCCC) sealed a 4 wicket win against Model Club to complete their treble and finish atop in Group A table at the 4th T Subol Memorial Veteran T-20 Cricket Tournament being organised by Manipur Veteran Cricket Association at Langthabal Public Ground.
Model Club posted 120 runs for all wickets down in 20 overs but the target proved too small for LCCC as the latter team surged home (123) in 18.4 overs with 4 wickets left in their hand and successfully sealed their place in the semi-finals as Group A winners.
Gourachandra made the highest 36 runs off 47 balls for Model Club in the first innings while Demin and Suresh respective added 25 and 22 runs to make it 120 runs total at the end.
LCCC's Rakesh, Krishna and Jiten were able to share two wickets each in this over before easing to their third win. LCCC chase was a bit shaky in the beginning but Shivadutta (28), Gulson (19), Krishna (17) and Sanjit (16) made a concerted effort to steer their team to 123 runs for the loss of 6 wickets in 18.4 overs.
Tejkumar and Sarat of Model Club were quite good in their bowling efforts and finished with 2 wickets in their names but failed to contain the effort of LCCC batsmen.
Demin and Doughlas also picked up a wicket each in this innings. Krishna who added 17 runs for LCCC and picked up 2 wickets, was adjudged man of the match.
With the match, the semi-final line up was completed and it will be CYCLONE, Thangmeiband vs CHAMP in the first semi-final match on January 15. The match starts at 10.30 am.