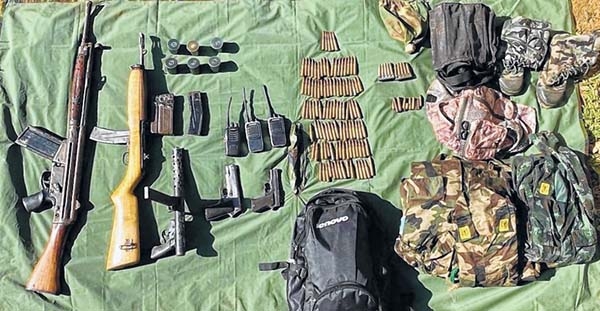 By Our Staff Reporter
TAMENGLONG, Jan 13: Troops of Indian Army busted a temporary hideout of the NSCN (IM) near Nungkhao, Tamenglong, on January 7.
A statement issued by PIB (DW) said that based on specific information about the presence of NSCN (IM) cadres, an operation was launched by an army unit located in Nungkhao.
On detecting the movement of security forces, the cadres fled from the spot, leaving behind a large quantity of arms, ammunition and other warlike stores which included a G-3 rifle, one US made carbine, one country made carbine, one 9 mm and .22 mm pistol each, along with assorted ammunition.
The recovered items were later handed over to the police concerned, for further investigation, it added.