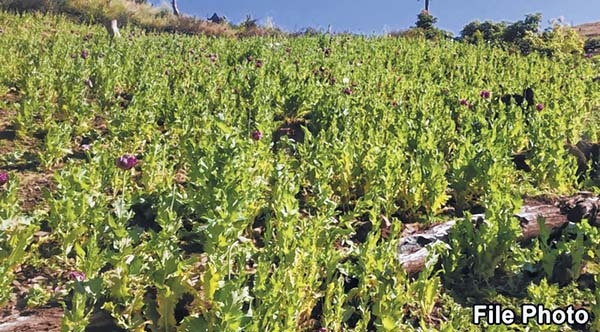 By Our Staff Reporter
IMPHAL, Jan 13: The State Government has been mulling to launch a pilot project which can effectively put a stop to poppy plantation in the State.
With Chief Minister N Biren in the chair, a meeting was held today where projects/schemes being implemented by Forest Department were reviewed.
Chief Secretary Dr J Suresh Babu, Principal Chief Conservator of Forest K Angami, top officials of Manipur Pollution Control Board and Loktak Development Authority were present at the meeting, informed a source.
The meeting discussed about checking clearance of jungles for poppy cultivation and the resultant loss of forest cover as well as about creating awareness among the masses on the growing need for conserving forests.
The Chief Minister instructed Forest Department to launch a pilot project in association with Horticulture and Fishery Departments which can effectively put an end to clearance of forest areas on Koubru and other hill ranges of the State for poppy cultivation.
It is said that the proposed pilot project may be launched from a village located either on Koubru hill range or Churachandpur district.
The meeting discussed about tailoring the project in such a manner that it is emulated by one village after another, said the source.
The project is basically about creating alternative sources of incomes for villagers who are engaged in poppy cultivation, added the source.