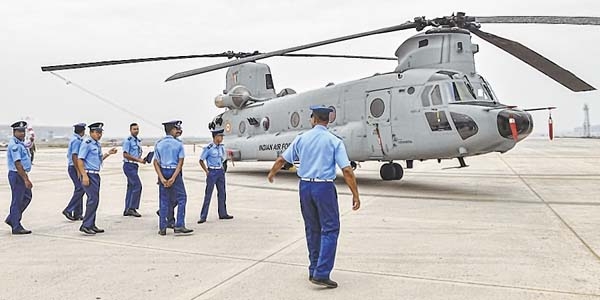 NEW DELHI, Jan 13
The Republic Day celebrations will commence with an homage ceremony at the National War Memorial, where Prime Minister Narendra Modi will lead the nation in paying tribute to the martyrs.
"This year the Inter-Service Guard will be commanded by Wing Commander Vipul Goyal," Indian Air Force Spokesperson Group Captain Anupam Banerjee said.
The proceedings of the parade at the Rajpath will commence with the unfurling of national flag and presenting of 'Rashtriya Salute' to the President by the President's Body Guards.
Air Force being the coordinating service, the flag unfurling at the central dais on the Rajpath will be done by Flying Officer Aman.
The IAF will participate in the parade with a ceremonial marching contingent, air force band contingent, the IAF Tableau and a mesmerising fly past.
The IAF marching contingent will consist of four officers and 144 Air warriors marching in the 'box formation'.
This year the IAF Marching Contingent will be led by Flight Lieutenant Shrikant Sharma and three supernumerary officers. The marching tunes for the contingent would be rendered by the Air Force Band Contingent, consisting of 72 musicians and three drum majors.
The Band would be led by Warrant Officer Ashok Kumar, who is an accomplished Drum Major. The Band would play many martial tunes to fascinate the audience, i.e. Northern Border, Space flight, Astronaut, Vijay Bharat, Subroto and Air Battle.
The famous Martial tune 'Sound Barrier' would be played on 'Quick March' in front of the main dais and when presenting salute to the President.
"Air warriors participating in parade have been shortlisted and selected through a stringent process from the Air Force," the Group Captain said.
Newly-inducted attack helicopter Apache and transport chopper Chinook will take part in the Republic Day flypast for the first time on January 26, officials said on Monday. IANS