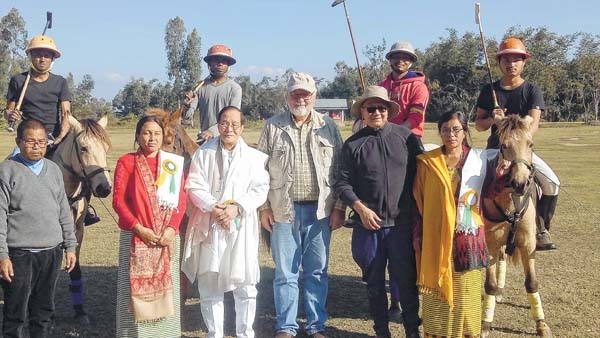 Our Correspondent
BISHNUPUR, Jan 13 : A "District Level US Rural Polo Coaching Camp" jointly organised by Huntre! Equine Manipur and Pony Care Centre, Kumbi has kicked off today at  Kumbi Kangjeibung (Pologround) with an aim of preserving pony and raising the standard of the game of polo in Manipur, which is regarded as the birthplace of the game.
The two day coaching camp will witness two polo coaches from USA,  Edward Amstrong and Carolyn Stimmel impart new techniques to 60 polo enthusiasts (12 to 40 years of age) from Bishnupur district. The inaugural function of the camp was attended by S Bira, MLA Kumbi AC; Chairperson of Kumbi Municipal Council, W Priyoranjan; Vice Chairperson L Babita Devi; Joint Director District Veterinary Officer, Bishnupur, P Gojendro Singh in the presence of American polo coach Edward Amstrong; Huntre Equine's Somi Roy and international polo player N Ashakiran.
The camp is a part of the Somi Roy's initiative that started back in the year 2016 with a motive to preserve the State's rare pony breed under the support of US and Argentina Polo Associations.
The camp which comes under the first project of its kind in Kumbi, targets to attract the youths and inculcate them the value and know-how of the game and eventually support to the cause of preserving pony in the State.