Portion of hill set on fire, spot inquiry on 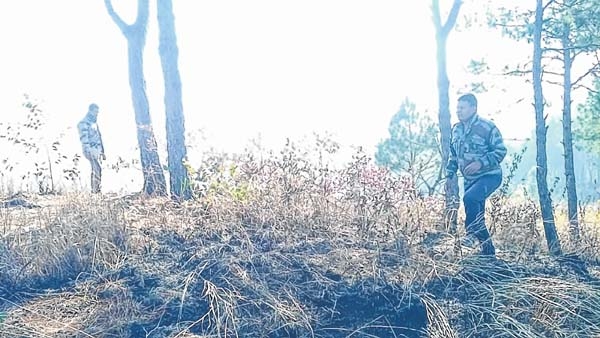 Our Correspondent
Thoubal, Jan 13: Some unknown miscreant (s) set fire at the hill range of Kairembikhok Awang Leikai, which is a part of Gwarok Reserve Forest on Sunday at around 6 pm, however, due to the timely response from the locals, the fire was doused before spreading to the adjoining areas.
It is reported that the staff of the Forest Department also reached the spot on time.
The site where the fire was reportedly started was inspected by a team of Forest Department led by Yairipok BO M Biren under the supervision of Thoubal DFO, Debala Laiphrakpam, this morning.
Speaking to media persons, M Biren appealed all concerned not to indulge in such illegal activity, which damages the ecosystem.
Apart from growing several nursery plants by the Forest Department at the foothill of the area where the fire occurred, many tree saplings were also planted in the hill to increase forest cover of the State, he said adding that spot inquiry has been initiated under the supervision of DFO Thoubal to understand the cause of the fire and to find out the culprit (s) involved.
It is expected that the fire which burnt 1 hectare (approx) of land might have killed at least 500 tree saplings.
Saying that a committee christened as Joint Forest Management Committee (JFMC) Kairembikhok was formed to look after the plants, bamboos and trees grown in the hill areas of the village, he claimed that not a single member of the committee has done anything to increase forest coverage in the area.
Thoubal Deputy Ranger Th Johnson; Wildlife Warden, W Ramchandra; staff of Thoubal Range; caretaker of  Kairembikhok nursery plants A Inaobi Singh; personnel of ThoubaI Fire Service and Thoubal Police also accompanied the visiting team.