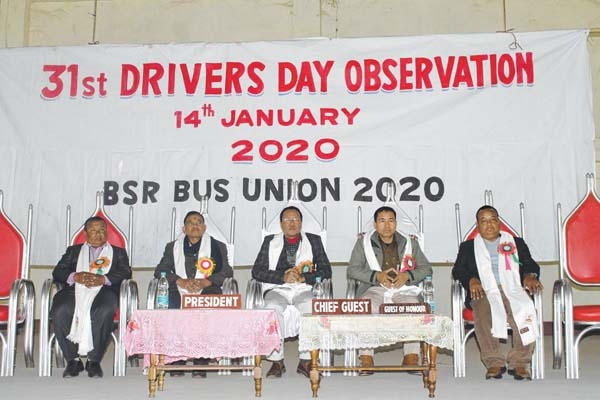 By Our Staff Reporter
IMPHAL, Jan 14: Indo-Burma Sugnu Road Drivers and Motor Workers Cooperative Society Ltd observed the 31st  Drivers' Day at JNNURM community hall, Kakching Sumak Leikai today.
As a part of the event, floral tributes were paid to the portraits of the deceased drivers and a two minute silence was also observed as well.
An exhibition football match was also organised for the drivers and helpers at SESU ground as well.
Speaking at the function, Joint Director of the Transport Department, BK Sharma said that on January 14, 1990, driver launched a no steering protest at Koirengei old airfield, condemning the atrocities and oppression against the drivers of the State and the Drivers' Day has been observed annually ever since.
He further saluted the drivers who are putting their lives on the line to bring goods and supplies for the people of the State.
On the occasion of the Drivers' Day, BK Sharma then expressed desire to bring the attention of the people towards road safety.
Informing that numerous programmes related to the National Road Safety Week are being carried out currently, the Joint Director conveyed that the number of vehicles on the roads has increased considerably and so has the number of accidents and mishaps.
Till March of 2018, the total number of vehicles in Manipur was around 3.75 lakh. But by March last year, the number had shot up to 4.07 lakh. On the other hand, 410 accidents occurred from January to September of 2018, leading to a death toll of 94 people and injuring 703 others. During the same period last year (January to September), 500 accidents occurred in Manipur, with 106 people losing their lives and another 805 individuals sustaining injuries, he informed.
Explaining the importance of road safety, BK Sharma reasoned that only the Transport Department and Traffic police ensure successful implementation of traffic rules and laws as it requires the united effort of the drivers, passengers and pedestrians.
If traffic rules are properly followed, loss of lives and accidents can be prevented effectively, he added.
The Joint Director continued that in the past, vehicle licenses used to be given out easily but that is not the case today, as the licenses are only provided after certain criteria are met and as per the nature of the vehicles.
BSR Drivers Union president N Dhaka, DTO Thoubal Karam Naresh, Kakching Municipal Council Vice-Chairperson Ksh Jhalajit, Kakching P/S OC Inspector AK Premjit, Pallel PS OC Inspector H Matumba, CDO Kakching OC N Tikendra and Bishnupur district police Inspector M Maipak were also present as well.