Nirbhaya gang rape convicts not to be hanged on Jan 22 as mercy plea has been filed: Delhi Govt 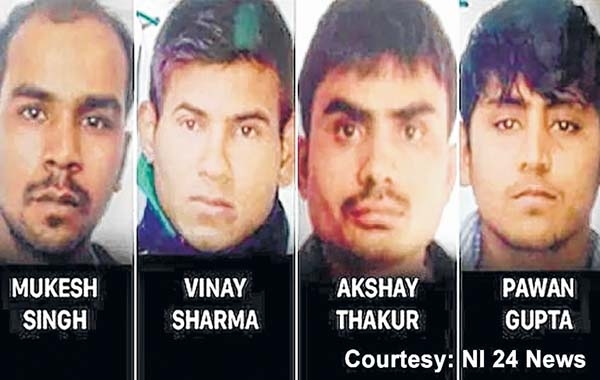 New Delhi, Jan 15
The Delhi Government said on Wednesday that the convicts in the 2012 gang rape case will not be executed on January 22 as a mercy petition has been filed with the President, reported news agency PTI.
Citing prison rules, the State Government said they are duty bound to wait for convict’s mercy plea to be decided for executing the death warrant.
The Supreme Court on Tuesday dismissed the curative petitions filed by two of the four convicts in the gang-rape and murder case — Mukesh and Vinay Sharma — challenging the May 2017 judgment of the Court that had upheld their conviction and death sentence.
The Supreme Court dismissed convicts' curative pleas in the 2012 Delhi gangrape case.
Two of the four death row convicts had filed curative petitions. On January 7, a Delhi Court had issued death warrants.
Immediately after the rejection of the curative petition, Mukesh filed his mercy plea before the President. He also moved the Delhi High Court challenging the decision of issuance of the death warrant by the Additional Sessions Judge, stating that his mercy petition was pending before the President.
The plea filed through advocate Vrinda Grover also sought that her client be given a minimum of 14 days’ notice if the mercy petition is rejected by the President so as to prepare for his departure from the world.
The four convicts in the case -- Mukesh Singh, Pawan Gupta, Vinay Sharma and Akshay Singh -- are scheduled to be executed at 7 am on January 22 in the Tihar jail premises.
In December 2012, five men and one juvenile had raped and brutalised a young paramedical student in a moving bus in Delhi, triggering a wave of Nationwide outrage. The victim later died from the injuries received.
One of the accused committed suicide in Tihar jail during the trial while the juvenile accused was sent to a reform home and released three years later.
Hindustan Times