Nirbhaya convicts will hang on Feb 1 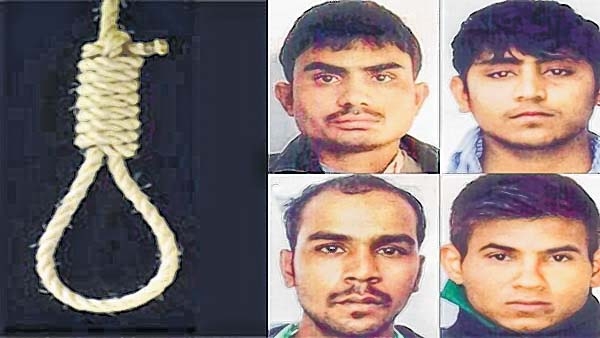 New Delhi, Jan 17
Fresh death warrants were issued this evening for the four men convicted of the gang-rape and murder of a 23-year-old medical student in Delhi in 2012. The four will now be executed at 6 am on February 1, Additional Sessions Judge Satish Kumar Arora said today, while also turning down a plea by Mukesh Singh, one of the convicts, to postpone the execution. The warrants were issued mere hours after President Ram Nath Kovind rejected a mercy plea filed by the same convict.
The new death warrants are dated to exactly 14 days from today, in accordance with a law that states convicts to be executed must have a reprieve from the time their mercy plea is turned down.
Vinay Sharma, Mukesh Singh, Akshay Kumar Singh and Pawan Gupta were to be hanged at Delhi's Tihar Jail on January 22, the same trial Court Judge had declared last week, signing a death warrant more than seven years after the young girl was gang-raped on a moving bus, tortured and killed.
However, on Thursday, five days before the scheduled execution, Tihar officials asked for a new date, saying the executions could not take place till after all mercy pleas were settled.
Mukesh Singh had filed his mercy petition on Tuesday, directly after the Su- preme Court dismissed a curative petition - the last legal appeal - moved by him and Vinay Sharma. The petition had been forwarded to the President via the Home Ministry late Thursday night and was rejected this afternoon. Nirbhaya's mother, Asha Devi, had made a public appeal to the President to summarily reject the petition.
Earlier today Asha Devi also made a public appeal to politicians to not seek "political gains" over her daughter's death. Her comments came amid a war of words between the AAP - which rules Delhi - and the BJP - in power at the centre - over delays in the execution.
The three other convicts have yet to file their respective mercy petitions, which they may do at any time prior to their execution. Each time such a petition is filed and rejected, that 14-day period must be observed, thereby potentially prolonging the execution.
On December 16, 2012, a 23-year-old medical student was gang-raped and tortured on a moving bus before being dumped on a road in south Delhi. The woman, who came to be known as "Nirbhaya", died on December 29 in a Singapore hospital.
Six men were arrested for the horrifying assault. A fifth accused - Ram Singh - allegedly committed suicide in Tihar Jail during the trial and the sixth man, a few months short of 18 at the time of the incident, was released after three years in a reform facility. NDTV