Peace pact inked with NDFB in presence of Amit Shah 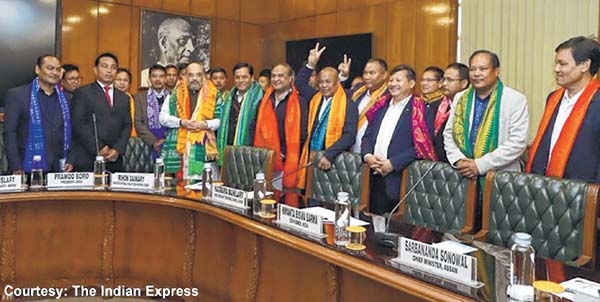 NEW DELHI, Jan 27
The Narendra Modi Government on Monday signed a "historic" peace accord with four armed groups of Assam, including one of the dreaded insurgent groups— the National Democratic Front of Boroland (NDFB) — providing political and economic bonanza.
The All Bodo Students’ Union (ABSU), which has been spearheading a movement for a Bodoland State was also signatory to the accord.
The tripartite agreement was signed by Assam Chief Minister Sarbananda Sonowal, top leadership of the factions of the NDFB, ABSU, Joint Secretary in the Home Ministry Satyendra Garg and Assam Chief Secretary Kumar Sanjay Krishna in presence of Union Home Minister Amit Shah who termed the agreement "historic".
"Today Assam is united. 1550 armed cadres of NDFB will be assimilated in the mainstream, will surrender on January 30, on Bapu's death anniversary," said Amit Shah.
"This agreement will facilitate all round development of the Bodo areas, their language and culture will be protected without compromising the territorial integrity of Assam," he added.
After the agreement was signed, Shah said it is a "golden document" that would end all demands of Assam's division.
Shah added that the agreement will fulfill political and economic demands besides safeguarding the Bodo language and culture. He also pointed out that 2,823 citizens, 239 security personnel have been killed so far on account of violent Bodo struggle.
Assam Chief Minister Sarbananda Sonowal said the Accord would preserve Assam’s territorial integrity as well as cultural and unique identity of Bodos.
The pact provides political and economic bonanza to the tribals, sans the outfit's key demand of a separate Bodoland State or Union Territory.
The existing structure of the Bodoland Territorial Council (BTC) will be strengthened with more powers and its seats will be expanded from 40 to 60, he said.
A commission will be set up for inclusion of Bodo dominated villages in the BTC and exclusion of those where Bodos are not in majority.
This was the third Bodo accord to be signed in last 27 years when the violent movement for a separate Bodoland State claimed hundreds of lives, destruction of public and private properties. He also pointed out that 2,823 citizens, 239 security personnel have been killed so far on account of violent Bodo struggle.
The first Bodo accord was signed with the All Bodo Students Union in 1993, leading to creation of a Bodoland Autonomous Council with limited political powers.
In 2003, the second Bodo accord was signed with the militant group Bodo Liberation Tigers, leading to formation of a Bodoland Territorial Council (BTC) with four districts of Assam -- Kokrajhar, Chirang, Baska and Udalguri -- called Bodoland Territorial Area District (BTAD).
The name of the BTC will be changed to Bodoland Territorial Region (BTR).
The BTC currently has control over 30 subjects like education, forests, horticulture but no jurisdiction over the police, revenue and general administration departments, which are controlled by the Assam Government.
The BTC was formed under the 6th Schedule of the Constitution.
The demand for a separate State for the Bodos has been going on in Assam for about five decades and several Bodo overground and militant groups raising it leading to agitations, protests, violence and many deaths.
Express News Service (with PTI inputs)