Won’t back an inch : Amit Shah on CAA 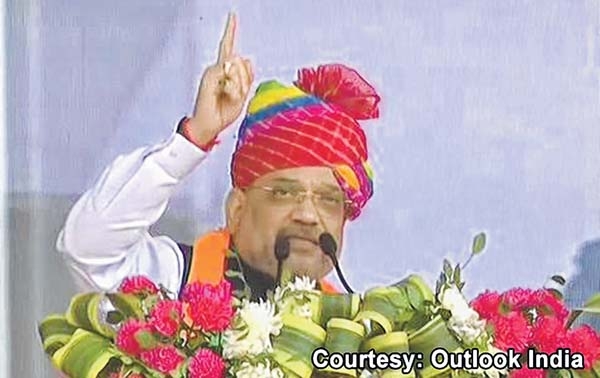 New Delhi, Jan 3
Union Home Minister Amit Shah on Friday said the Citizenship Amendment (CAA) is a law to grant citizenship and not to take it away. Shah also said the Government will not back out on its decision to implement the CAA despite the criticism by the Opposition.
Amit Shah was addressing a rally in Rajasthan’s Jodhpur to launch an “awareness programme” in support of the amended Citizenship Law.
“No provision in Citizenship Amendment Act to take anyone’s citizenship away, it is a law to grant citizenship,” said Amit Shah.
Opposition parties have been protesting the amendment to the Citizenship Law which grants citizenship to non-Muslims from Pakistan, Afghanistan and Bangladesh if they have come from these three countries before 2015 after facing religious persecution.
The Home Minister said the Centre will not move even an inch away on the issue, no matter how many parties join hands against it.
“Even if all these parties come together, BJP will not move back even an inch on this issue of the Citizenship Amendment Act. You can spread as much misinformation as you want”, Shah said.
Amit Shah also attacked the Congress accusing it of playing vote-bank politics by spreading “misinformation” on CAA.
“For vote-bank politics, Congress party is speaking against a great personality like Veer Savarkar as well. Congressmen should be ashamed of themselves,” he said.
Earlier in the day, West Bengal Chief Minister and Trinamool supremo Mamata Banerjee launched a stinging attack at the Centre, alleging the Government is dividing the country in the name of religion. Banerjee said she will not allow the BJP Government to take away their rights.
“If we raise the issue of joblessness and hunger, they say go to Pakistan,” Banerjee said while addressing a rally in Siliguri. “I won’t let them take rights,” she said.
The BJP-led Central Government is pulling all stops to dispel doubts about the provisions of Citizenship (Amendment) Act. Party leader Anil Jain said the BJP has started a door-to-door campaign that will reach out to three crore families to clear perceptions about CAA.
Courtesy Hindustan Times.