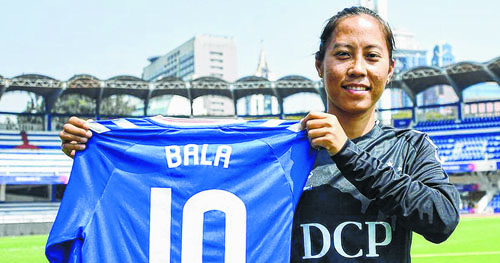 Kaushal Shukla
The 29-year-old Indian striker has signed a the 18-month deal with Scottish giants Rangers FC.
In Manipur’s Bishnupur district, the sight of young female players going toe-to-toe with their male counterparts on the same football field is fairly common.
This wasn’t the case until a certain Ngangom Bala Devi changed it forever. Shattering pre-set notions, Bala, born to a football-playing father, took to the field along with her elder brother. Soon, more girls joined in and her hometown Irengbam got its first-ever football team for women.
Bala seems to have made a habit of breaking into uncharted territory since that age.
The latest episode of her unparalleled exploits is the 18-month deal with Scottish giants Rangers FC that makes her the first women footballer in India to have a professional contract with an overseas club.
This historic move was facilitated by Bengaluru FC, who have a partnership with Rangers, and could be categorised as a marketing exercise. But few would debate against the performances Bala Devi has been putting over the last few years
She has scored 52 goals in 58 appearances for the national team and netted 38 times in her first two seasons of the Indian Women’s League.
Even during her week-long trial for the Rangers in Glasgow last November, she was finding the net.
“I scored twice in one of the games we played among the players at Rangers during my trial,” Bala told Scroll.in.
“The coach played me in the attacking midfielder position that I play for India. He also gave me the No 10 jersey. It was very motivating for me and I was able to give my best” she added.
The 29-year-old was quietly confident of being offered a contract by the Scottish club and the faith in her performance she had put in during her week in Glasgow was noticeable.
“I had given my best, so I wasn’t nervous. The coach there told me that he was pleased with the technical and tactical side of my training and I only needed to work a bit more on my fitness. Overall it was a good week of training for me,” Bala said.
The experience gave Bala confidence that Indian players could cut it at that level, but also offered a dose of reality that plenty of work needs to be done by the players.
“The players are better than us physically and technically, but we are not far behind. The aspect where we need to work most is the tactical side of things. Indian players must develop that understanding to play in Europe. However, I felt that it is not beyond our capabilities and we can do it,” she said.
Natural goalscorer
Footballers often need a few years to nail down their playing position during their early years.
However for Bala Devi, the striker’s role came naturally to her.
“My coach Lokeshwari Devi always played me as a striker. I was always comfortable in that position and performed well. I don’t know what made her take that call but I think my ability inside the box and around the six-yard area has always set me apart,” Bala said.
Starting out at local side Iksha, she moved a club in Imphal before joining Manipur Police, a team that has given many players to the country, including the legendary Oinam Bem Bem Devi.
Following her footsteps, Bala Devi also enjoyed a stint in Maldives, although it was not of a professional nature.
Having played for the Indian national team for 14 years, Rangers seems like a natural progression for her. It remains to be seen if she can continue her scoring touch in a much bigger league.
“I’ve never been asked to change my technique and the goals come naturally to me. But now let’s see what’s in store for me at Rangers. It will be hard adapting to new surroundings and the increased level but I’m looking forward to the experience,” she added.
Having made this historic move, India’s eyes are will be on Bala Devi.
Their wish of seeing one of their own shine in a European league brings a bit of pressure with it, but the Manipuri forward welcomes it all.
“I must set an example. I have to instill belief in footballers back home that they too can play at this level. I’ll do my best to inspire them,” she said, setting sights on a new chapter in her career, and also perhaps even in Indian football.
Courtesy Scroll.In