Protests erupt in Delhi after attack on Pak gurdwara 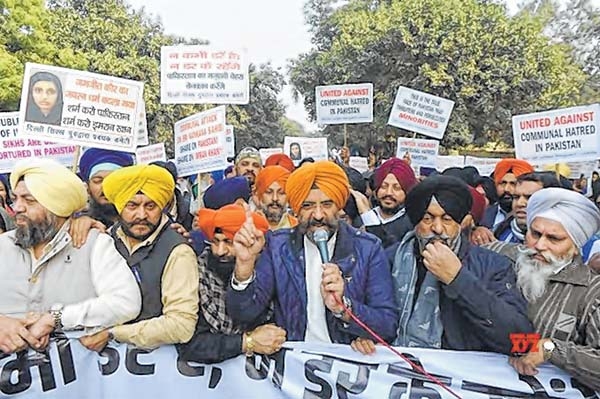 NEW DELHI, Jan 4
Members of the Delhi Sikh Gurdwara Management Committee (DSGMC) and the Shiromani Akali Dal on Saturday staged a protest near the Pakistan High Commission here over a mob attack on Gurdwara Nan-kana Sahib.
Gurdwara Nankana Sahib, also known as Gurd- wara Janam Asthan, is the site near Lahore in Pakistan where the first Guru of the Sikhs, Guru Nanak, was born.
On Friday, a violent mob had attacked the gurdwara and pelted it with stones.
The protest by DSGMC and Akali members was held at around 1 pm near Chanakyapuri, an affluent neighbourhood and diplomatic enclave in the city. The protesters were raising slogans against Pakistan and Prime Minister Imran Khan.
The Sikh community members claimed that they have submitted a memorandum at the Pakistan High Commission, asking Islamabad to "explain the failure of law enforcing agencies" in the country.
Meanwhile, Union Minister Hardeep Singh Puri said those opposing the Citizenship (Amendment) Act (CAA) should introspect over their stance on the legislation after the incident of vandalism at the Nankana Sahib Gurdwara.
Speaking to ANI, Puri said that Friday's incident at one of the holiest Sikh shrines provides yet another proof of the state of minorities in Pakistan.
"This was a wanton act of vandalism, stone-pelting and desecration against one of the holiest Sikh shrines. Those who have taken a stand against the Citizenship Amendment Act clearly either do not realise what they are saying or are deliberately misleading people," said Puri.
"If any proof were needed about the state of the minorities in Pakistan, this incident after the Friday prayers yesterday provided that proof," Puri said. "All these people (CAA opposers) should do some serious introspection after yesterday's incident." An angry group of local residents pelted stones at Gurdwara Nankana Sahib in Pakistan on Friday evening. The group was led by the family of a boy who had allegedly abducted Sikh girl Jagjit Kaur from her home in August last year. India has strongly condemned the incident and called upon Pakistan to take immediate steps to ensure the safety and welfare of the members of the Sikh community. Agencies