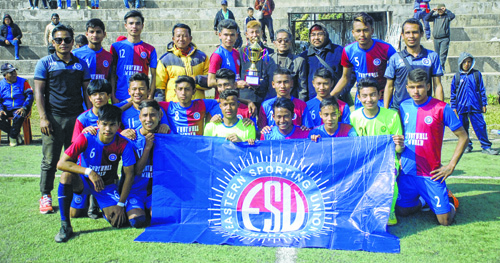 By Our Sports Reporter
IMPHAL, Jan 7 : Eastern Sporting Union (ESU), Wangkhei were crowned the champions of the 31st Junior Boys Inter Club Football Tournament title after beating NEROCA FC, Sangakpham by a slender 1-0 margin in the final match today at Artificial Turf, Khuman Lampak.
Winners ESU were feted with the title trophy by RK Sanayaima, secretary of All Manipur Football Association today.
The goal worthy of a winner for ESU was scored by Thumsol Tonsing off a penalty kick in the 57th minute of the match after the two teams played out a barren first half.
The two sides had fair share of possession and scoring chances in this competitive match but Thumsol Tonsing strike from the spot after his team mate L Ngouba Meitei was brought down inside NEROCA FC box by defender Th Bablu, was more than enough to differentiate the two sides.
The next minute of the goal saw ESU being reduced to 10-man losing Md Wajir Khan for his second yellow (first yellow in the 10th minute), but it had a little effect as the team successfully withstand latter pressure to go home 1-0 and cruised to tourney title.
Yesterday, Ideal FC, Churachandpur were handed a walkover as FCA, Saikhul, Sadar Hills did not turn up for their last Group B league match of the tournament. Eventually, FCA were removed from the tournament by the tournament organising committee. Meanwhile NEROCA FC thumped SFC, Kakching by 4-1 goals to book the final berth as Group B winners. Interestingly all four goals of the match for the winning side was scored by L Lupheng in the opening half itself (9', 12', 19', 29'). The consolation goal of the losing side was scored by Tomthinnganba in the 44th minute.