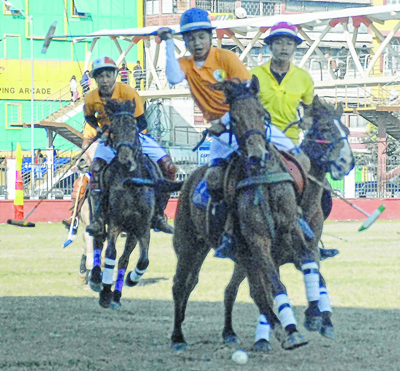 By Our Sports Reporter
IMPHAL, Jan 8 : X Polo Club and Thoubal District Polo Association claim victories in today's matches of the 3rd Junior Boys (U-16) State Polo Tournament being organised by All Manipur Polo Association at Mapal Kangjeibung to move into the semifinals.
In the first match of the tournament which is organised in knock out basis with a participation of 7 teams, X Polo Club got the better of Thangmeiband Youth Polo Club by 3-1 goals and entered into the last 4 round.
With neither team making the best of their chances, the first two chukkers remained goalless. X Polo Club however broke the deadlock with the help of T Dinesh Singh when the third chukker was barely a minute old but the Thangmeiband team managed to draw level in the third minute with L Raja Singh finding the target.
After a 1-1 draw till the end of third chukker, T Vikash helped X Polo Club regain the lead in the second minute of the fourth chukker and Herojit Thokpam chipped in the final goal lately in the last minute to seal the issue 3-1 in X Polo Club's favour.
Meanwhile in the second match of the tournament, Thoubal District Polo Association thrashed K&MM RS-B by 6-1 goals to make their way into the semifinals.
N Kirankumar Singh shone with three goals in this one sided match with goals coming up in the 1st, 2nd and 3rd chukkers after O Shitaljit opened up the account in the opening minute of the first chukker.
The other two goals for the winning side was scored by Pamheiba Thounaojam, first in the third chukker and the finisher in the last chukker. The lone goal of the losing team was scored by N Lamnganba in the 3rd minute of the second chukker.
Yesterday in the opening match of the 15th State Women Polo Tournament which is participated by 4 teams and organised in league round basis, Thangmeiband Youth Polo Club thrashed MPSC 17-1.
In the second match of the same competition, Linthoingambi Kangjei Lup defeated Chingkheihunba Polo club by 5-3 goals.
In the third match of the women's tournament, Samurou Polo Club edged past K&MM Riding School by 7-5 goals.