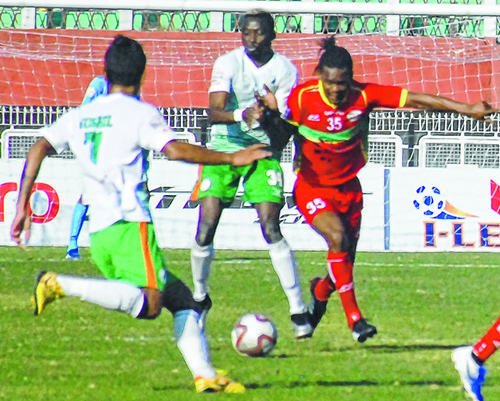 IMPHAL, Jan 8
TRAU emerged victorious in the first-ever Imphal derby in the I-League as they edged past rivals NEROCA FC 2-1 on Wednesday at the Khuman Lampak Stadium, Imphal.
Boubacar Diarra gave NEROCA the lead (9') but Naocha Singh (41') and Krishnanda Singh's (64') strikes helped the debutants pick up their first-ever win in the I-League
Both teams made three changes in their starting lineups from their previous matches. Gift Raikhan brought in Zodingliana, Jiteshwor Singh and Zico Sekle in place of Khanngam Horram, Gaty Kouami and Romtan Singh. TRAU’s Dimitris Dimitriou, on the other hand, replaced Kofi Tetteh, Premjit Singh and Sandeep Singh with Gerard Williams, Naocha Singh and Krishnanda Singh.
It was NEROCA who were dominating proceedings at the beginning and picked up an early lead in the 9th minute of the match. Boubacar Diarra received a long ball from Ousmane Diawara inside the box and found the back of the net.
After conceding early, TRAU returned into the game and started to take the control of the match from their rivals. They increased their intensity in attack and posed constant threat on the NEROCA defence.
Their persistence finally paid off in 41st minute when Naocha Singh pushed the ball into the net from Princewell Emeka’s cross to restore parity in the match.
TRAU resumed play in the second half with similar intensity as they had at the end of the first half. They looked hungry for a second goal and dominated proceedings. NEROCA, on the other hand, took the backseat and focused on keeping the TRAU attackers at bay.
TRAU's attacking approach paid off in the 64th minute when Krishnanda Singh handed them the lead. The winger headed Naocha Singh's curling corner straight into the NEROCA goal.
Just seconds before the final whistle, Princewell Emeka had a golden opportunity to score a third goal for his team when he found himself one on one with Marvin Phillip but his shot had hit the side net.
TRAU has improved immensely under new coach Dimitris Dimitriou.
The I-League debutants had a lot of turmoil since the beginning of this season. They were performing miserably under Technical Director Douglas Silva and were languishing at the bottom of the table. But with the return of Cypriot manager Dimitris Dimitriou at the helm, the team has improved leaps and bounds and the results are showing.
TRAU climbed to the ninth position on the league table from rock bottom after today's win while NEROCA goes down to the 10th position. While TRAU face Indian Arrows away from home on January 12, NEROCA host Real Kashmir on January 14.              Agencies