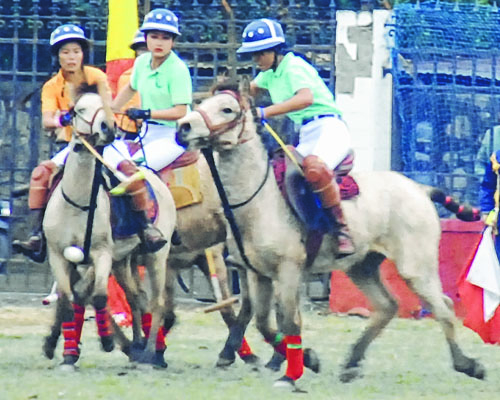 By Our Sports Reporter
IMPHAL, Jan 9 : Linthoinganbi Kangjei Lup maintained their fine form to sink Manipur Police Sports Club (MPSC) 13-0 and boosted their final berth hope in the ongoing 15th Women's State Polo Tournament being organised by All Manipur Polo Association at Mapal Kangjeibung. The day also saw Chingkheihunba Polo Club got the better of Thangmeiband Youth Polo Club by 5-3 goals.
In the first match of the day which was played under light rain, Linthoinganbi Kangjei Lup which kicked off their campaign with a 5-3 win against Chingkheihunba Polo Club, showed a more improve side to earn a huge 13-0 victory against MPSC.
Linthoinganbi Kangjei Lup seen thoroughly dominating the possession right from the beginning and had a 2-0 lead in the first chukker before making it 6-0 till the end of second chukker. The scoring spree continued in the following chukker as well with three goals coming up in the third chukker and four in the last chukker.
L Thadoi which opened up the scoring in the opening chukker had her say with another goal in the second chukker and two more goals in the last chukker to complete a haul of four goals. Sangita also shone in the latter half wherein she added two goals out of three goals in the third chukker before connecting to two more goals in the final chukker to ensure Linthoinganbi Kangjei Lup a comprehensive 13-0 victory against MPSC.
Kh Deventy and Kh Habe also added two goals each for the same team as MPSC were never seen in contest while O Asha Lucky managed a single.
Meanwhile in the tournament's fourth league match, Chingkheihunba Polo Club keep their hope alive by earning a 5-3 comeback win against Thangmeiband Youth Polo Club.
The Thangmeiband side which started the league campaign  with a huge 17-1 victory against MPSC, enjoyed early lead but lose ground in the latter half of the game to go down 3-5 to Chingkheihunba Polo Club as Th Tanna set up the recovery path scoring three goals (one in the second and two in the third chukker) before Neelu RK and I Sangita added a goal each in the last chukker.
Thangmeiband Youth Polo Club led the first chukker 1-0 thanks to Oinam Elizabeth second minute strike and were 3-1 ahead till the break with Victoria Oinam and Elizabeth scoring a goal each.
Chingkheihunba Polo Club will face Manipur Police Sports Club in the 5th match of the competition on January 11 before Linthoinganbi Kangjei Lup play against Thangmeiband Youth Polo Club team in the last league match.