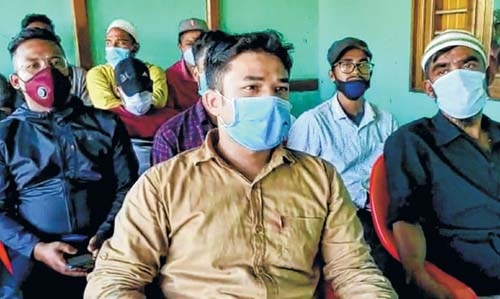 Our Correspondent
THOUBAL, Oct 15: The Wangmeiyum clan has boycotted ex-MLA of Lilong AC, Abdul Nasir, for making comments  which are hurtful to the sentiments of the clan, the president of the Wangmayum Development Organisation (WDO) Wangmayum Nawaz Khan stated during a press meet held at Lilong Mayai Leikai today.
Speaking to mediapersons during the press meet called by the Wangmayum Central Committee (WCC) and WDO, Nawaz Khan informed that a deadline till October 10 was issued to the ex-MLA to apologise to the clan for his insensitive remarks. However, the ex-MLA has continued to remain silent and as a result, the WCC and WDO on behalf of the clan have decided to boycott ex-MLA Abdul Nasir from all areas inhabited by the clan.
Further, legal actions will be initiated against Adbul Nasir, the WDO president added.