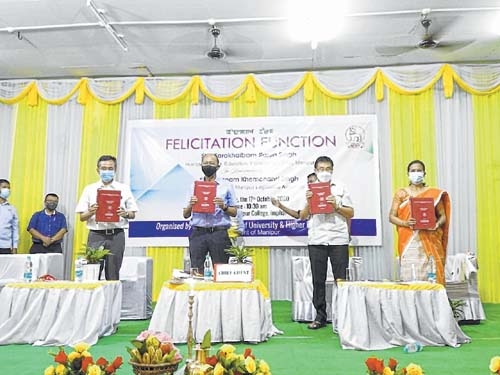 By Our Staff Reporter
IMPHAL, Oct 18: The Department of University and Higher Education, Government of Manipur has organised a felicitation function of S Rajen, Minister, Education, Fisheries & CADA yesterday at Manipur College, Imphal.
Speaker Y Khemchand attended the function as the chief guest. The function was also attended by M Harekrishna, Commissioner, Higher Education and Vice-Chancellor of Dhanamanjuri University; Dr Nivedita Lairenlakpam, Joint Secretary, Higher & Tech Education and Registrar, Dhanamanjuri University; officials of Higher Education Department; Principals of Government/Aided Colleges and other invitees.
Project Report of Data Mining of Government Colleges of Manipur 2016-2020 and Proceedings of Panel Discussion on Emerging Disciples and their Prospects and Challenges in Manipur conducted under RUSA, Manipur were also released in the felicitation function by the Education Minister and Speaker.
The project report of Data Mining discussed the present state of higher education and also made suggestions to bring holistic quality of educational atmosphere in the Government Colleges ofManipur.
Speaking at the function, the Speaker emphasised the necessity for increasing the budgetary provision for improving higher education in Manipur. He also spoke of the need for putting the discussions and ideas into actions to bring the changes.
Education Minister S Rajen spoke about the reasons for the failure of the Government schools to attract students.
The Education Minister said that the infrastructure in the Government Schools and Colleges are not sufficient.  “The Government would try to provide the infrastructures and recruit the required teachers in the Government Educational institutes, he said.
The Education Minister appealed to the officials of the department to work for bringing a transformation in the Government colleges.
Commissioner M Harekrishna highlighted some of the challenges in higher education in Manipur. He also spoke of the importance of giving priority in higher education sector in the State.