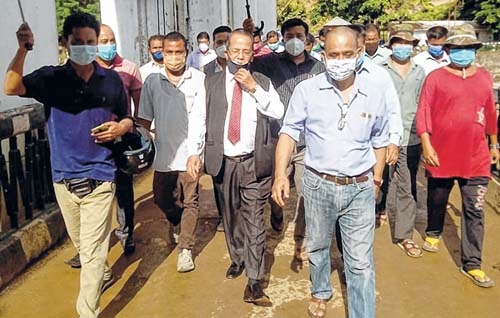 Our Correspondent
BISHNUPUR, Oct 17 : After it halting the process of installing motorised gates by the NHPC (National Hydroelectric Power Corporation) on major roads surrounding Ithai barrage, the Manipur Human Rights Commission inspected the sites of the gates today.
Bishnupur police, SDO/SDM Moirang subdivision accompanied the members of the Commission and its Chairperson, Khaidem Mani during the field enquiry today.
It may be noted that Pumlen Pat Khoidum Lamjao Kanba  Apunba Lup and the Rising Star Club had filed petitions with the MHRC seeking its intervention on October 13. They had alleged that construction of at least four motorised gates on main roads surrounding Ithai barrage would restrict free movement of people thereby denying them their right to life.
Taking note of the petitions, the MHRC had directed the Deputy Commissioners of Kakching and Bishnupur district to halt the construction of the gates and sought reports on or before October 27. The MHRC had also stated that it would conduct a field enquiry today.
Inspecting the sites, the Commission’s Chairperson opined that the construction of the gates on the main roads may restrict free movement of people which may exploit their rights as Indian citizens.
He further continued that even though the Indian Constitution gives free movement of people within the country, there are certain reasonable restrictions depending on the law and order situation.
Even as the NHPC has cited security reasons for the need to construct the motorised gates, the Commission has no knowledge whether there had been a public notification for the same. The Commission will work to know the exact reasons for construction of the gates. As the NHPC is under the Central Government, the Commission can recommend the State Government to write to the Centre to know the need for the gates.
The gates will only be constructed when an amicable solution is there. People of the region should not panic and worry, he said.
On the other hand, there was a mass sit-in protest at Ithai barrage community hall today. Locals of Kumbi, Sugnu, members of clubs and Meira Paibis took part in the protest against construction of gates on main roads.
MHRC Chairperson Khaidem Mani, core group members U Nabakumar and W Basanta and United Committee Manipur (UCM) president Sunil Karam attended and spoke at the event.
Speaking to the protesters, UCM president Sunil Karam stated that the construction of the motorised gates by the NHPC will restrict free movement of people and affect their daily businesses and livelihood. The gates will add more to the woes of the people  who are suffering as a result of the Ithai barrage, he said.
If the gates are a result of the 2017 report of the Intelligence Bureau, it is against the people, he said adding the security reason cited for construction of the gates could have been justified if the gates were constructed before 2010. The law and order situation has improved significantly in the region and as such the gates are not needed, he added.
He also sought the attention of the Government to understand the plight of the people and  take up appropriate action. If the Government fails to act in time, the situation may trigger severe outrage and agitation by the people, he said.