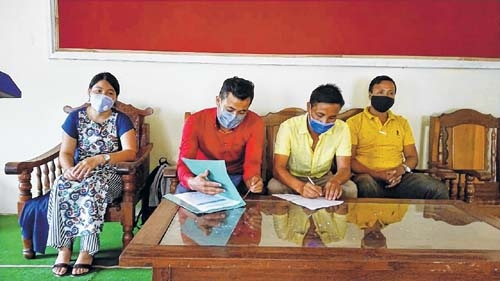 By A Staff Reporter
IMPHAL, Oct 21: Demanding the long pending dues of ward development committee (WDC) skilled and unskilled  labourers be paid before October 27, the All Manipur Ward Development Committee Skilled & Unskilled Labour Association has said that they will launch agitation from the following day.
Speaking at a press meet held at Manipur Press Club today its secretary H Naoboy Singh said the wages of the ward development committee skilled and unskilled labourers working under Municipal Councils has not been paid since July of 2019.
He demanded the authorities concerned to pay their dues of the last 15/16 months before ‘Ningol Chakkouba’ festival.
“The non-payment of wages for such a long time has made us suffer even more during this time pandemic,” he said.
“If our wages are not paid by October 27, from the following day we will launch various forms of agitation with the support of urban local bodies,” he said.
“We had already made many requests to the authorities concerned regarding the matter but there is no response, so we have finally decided to launch the agitation,” he added.