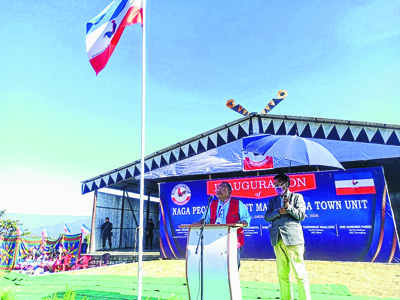 Our Correspondent
Senapati,14Nov :The office building of the Naga People's Front, Maram area town unit was inaugurated today by Awangbow Newmai who is the president of NPF, Manipur State Unit and Minister in charge of Forest, Environment & Climate Change and Sericulture at Maram Centre today.
The program was held in the presence of PHED Minister Losii Dikho, Chairman of Hill Area Committee K Leishiyo, Ukhrul ADC Chairman Dr Yaronsho Ngalung, other ADC members of NPF and officials of the NPF.
The flag of the party was hoisted and a memorial stone of the new building was unveiled by the party president, Rev Fr Neernakunnel, Cyriac, SDB, Parish Priest, St John Bosco Parish, Maram.
Robert T Maram, working president of NPF, Manipur State Unit gave the welcome address and Hongreikhui Kashung, general secretary (administration), NPF, MSU administered the oath taking to the newly appointed office bearers of of the NPF, Maram area town unit. ADC Member Rangpung John was appointed as the president of the unit along with 5 prominent leaders as advisers.
Speaking on the occasion, K Leishiyo Chairman HAC stated that recognising one's identity is not ruled out in this contemporary world. There are nearly 300 countries at present in the world based on their identity. Different tribes based on their unique culture and traditions are clubbed together to be known as Nagas.
Different developments and changes have come to the region with the arrival of the NPF party. The HAC Chairman urged for unity and to bring peace and change as given in the motto of the party.
PHED Minister, Losii Dikho lauded the Maram community and added that NPF has attained a historic achievement in ngetting a Parliamentarian elected  and four elected members of the Manipur Legislative Assembly. Credit for such achievements goes to the work ethics of the party that starts any program with a prayer and closes with a prayer based on one's faith, the Minister stated.
Although, the NPF lost majority in Nagaland Legislative Assembly, the Minister said that the situation is different. He asserted that it is only the NPF party that stands for the cause of the people. The party is committed to continue with this objective in future too.
NPF is the only party that can bring peace and change in Manipur. Without NPF, bringing peace and change would be impossible, the Minister asserted and added that as the party remains strong, the whole State of Manipur would remain strong, he mentioned.
Forest Minister Awangbow Newmai stated that people have the right to elect their representatives according to their own choices in a democratic set up.
The party president also mentioned that the party was formed to protect the rights and positions of the smaller groups of people in the land. Shouting on the streets cannot protect one's rights but only through political platforms.
The NPF believes that everybody has his or her own rights and this should be respected in order to bring peace in the land.
The NPF supremo stated that the party has been addressing or taking part  representing the voice of the people. The NPF as a political party has got the opportunity to speak the sentiments of people at the All Political Party Meeting.
The NPF party stands for the rights of the weaker sections of the people and with the opening of the town unit at Maram, the NPF leader asked people of the region to come and discuss their grievances  at the office.
While urging people of the region to support the party, the NPF leader also appealed to consider the party as an appropriate platform for expressing their grievances.