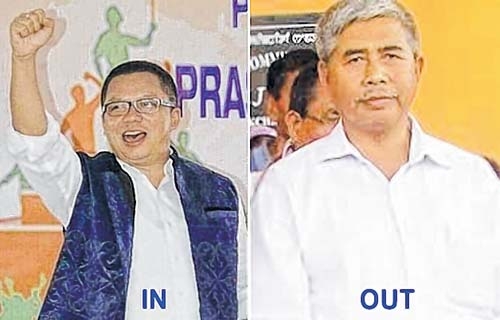 By Our Staff Reporter
IMPHAL, Nov 5 : In a dramatic twist, the High Court of Manipur has declared the 2017 election of Yengkhom Surchandra null and void and declared BJP candidate Mayanglambam Rameshwar, who secured second place in the election as elected Member of Kakching Assembly Constituency today.
A single bench of the High Court comprising Justice M V Muralidharan was hearing a petition M Rameshwar filed challenging the election of Yengkhom Surchandra in the 2017 State Assembly elections which led to the formation of the present BJP-led Government.
Two time MLA, Yengkhom Surchandra had won the election on a Congress ticket defeating his closest rival BJP candidate Mayanglambam Rameshwar 11,133 to 10,503 votes.
Notably, Y Surchandra who also served as an MLA in the previous Congress Government allegedly jumped ship and joined the BJP leading to his disqualification as an elected Member recently just befoe the Rajya Sabha election this year.
Since then, the seat for 37-Kakching Assembly Constituency had been lying vacant in the 11th Manipur Legislative Assembly.
Earlier, the Court had kept the order reserved after the final hearing of the petition on October 21 through video conference.
M Rameshwar had filed the petition under Section 100 (1) (d) (i) and (iv) of the Representation of People Act, 1951 to declare the election of Y Surchandra in the 11th Manipur Legislative Assembly Election, 2017 null and void and declare him (Rameshwar) as the duly elected Member from 37- Kakching Assembly Constituency.
The petition claimed that Y Surchandra had failed to disclose full particulars of his assets and liabilities including those of his dependants and also concealed vital material information in his affidavit pertaining to non-agricultural land he owns. He also failed to disclose the details of loans (on car) or dues to banks/financial institutions, details of deposits in bank accounts of his spouse. Above this, he intentionally concealed that his spouse is a retired Government servant having served as the Director, Art and Culture, Government of Manipur and drawing pension, claimed the petitioner.
Earlier order on February 17, 2017, the Returning Officer had rejected the objections raised by the agent of M Rameshwar and accepted the nomination of Y Surchandra thereby allowing him to contest the election, said the petition contending that M Rameshwar, who came second securing 10,503 votes against Y Surchandra’s 11,133 votes, should be declared elected and represent 37-Kakching Assembly Constituency in the State Legislative Assembly.
The Court, setting aside the election of Y Surchandra, declared M Rameshwar as the duly elected Member of 37-Kakching AC.
Y Surchandra had also filed a written statement in response to the petition filed against him.