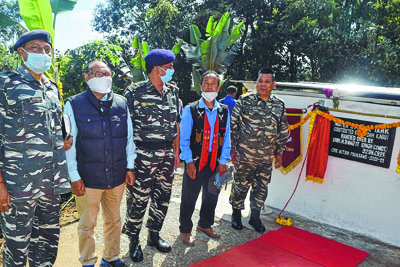 Our Correspondent
BISHNUPUR, Nov 7: A water reservoir constructed at Lamdan Kabui Village by 32 Bn CRPF as part of its Civic Action Programme 2020 under the aegis of Manipur & Nagaland Sector was inaugurated, today
Commandant 32 Bn CRPF, H Ranjit Singh,  chief of Lamdan Kabui Village, M Khouripou attended the inauguration programme among others.
At the function, H Ranjit stated that such an initiative of the CRPF will help in improving the police-public relation.
He continued that the BN will carry out more such development works under its Civic Action Programme in future.